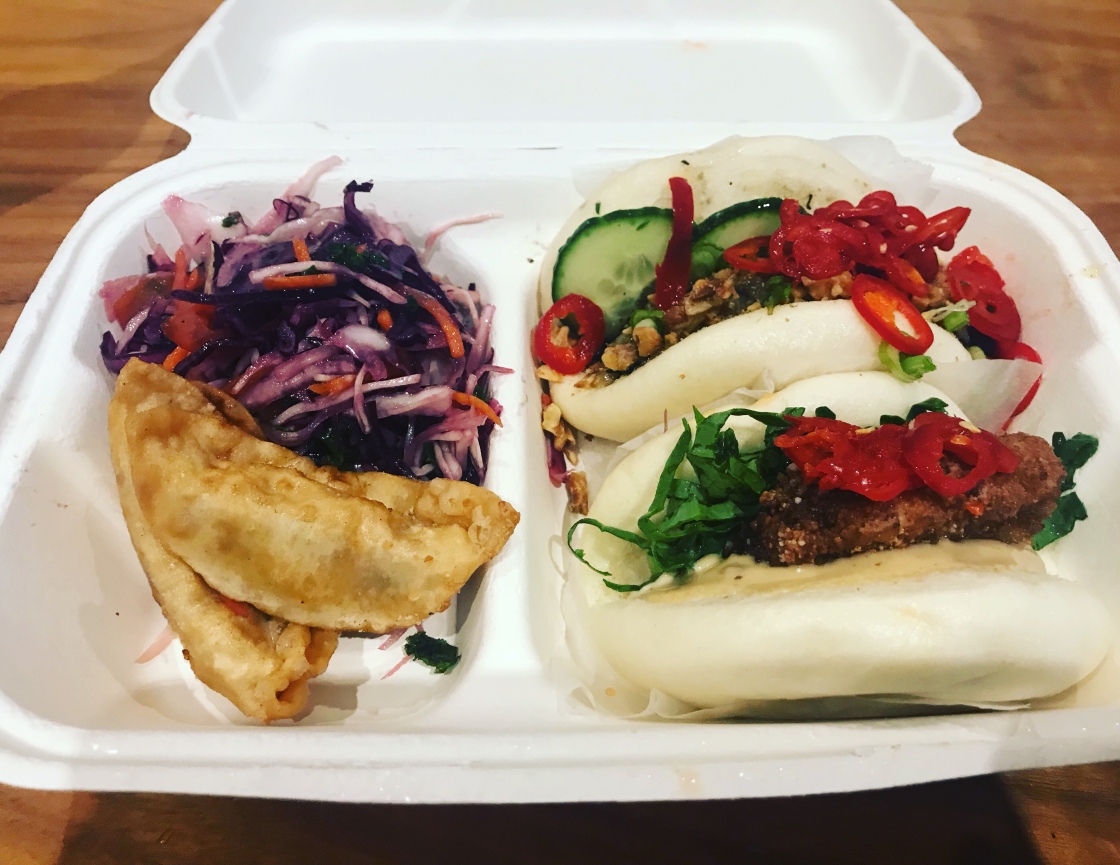 I’ve always loved munching on market food and when I lived in London, Spitalfields was a good weekend spot for this. Luckily, for this visit we were staying across the road from the market so I got to have a few days munching around.

Spitalfields has gone through a reno, which I assume was to justify a rent hike, and now there are more permanent spots for food – which is good and bad.

Bleecker Street Burgers: despite telling myself I wasn’t having a burger in London cause I live in the land of burgers now, it happened. But I have no regrets. Bleecker Street delivers a beautifully seasoned hamburger, which may not look flash, but tastes delicious. Oh, and I love that you can have a mix of sweet potato & potato fries. These guys are pretty much all over London now. I noticed that a lot while I was over, places that were cool food trucks or little shops are now chains all across the city. This gives me mixed feelings. 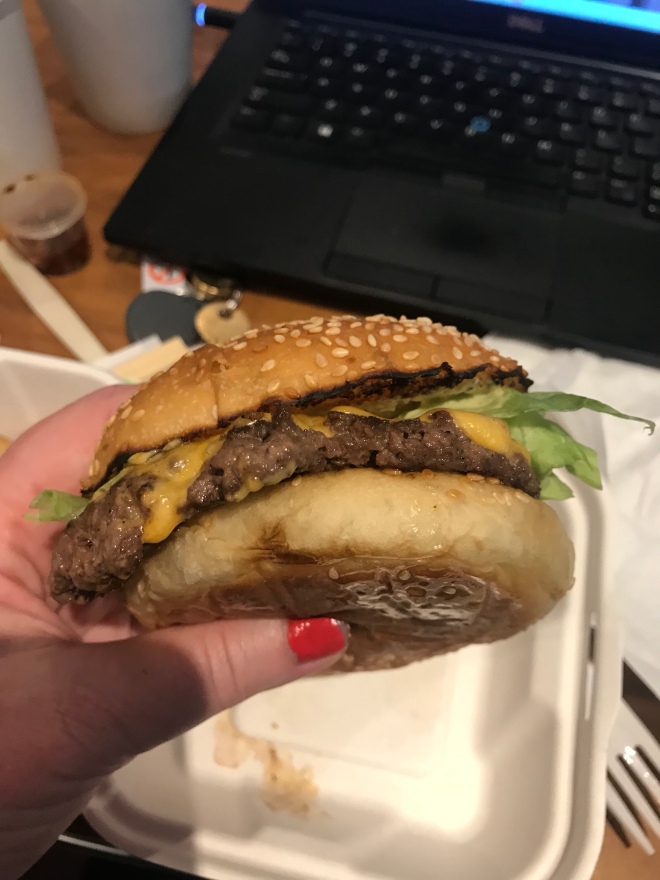 Yum Bun: I live Yum Bun. Such good steam buns! They do a great little 2 bum pack with slaw and dumplings for £10. I went veggie and opted for the tofu and the mushroom, both were great. The miso glaze on the mushroom was phenomenal. 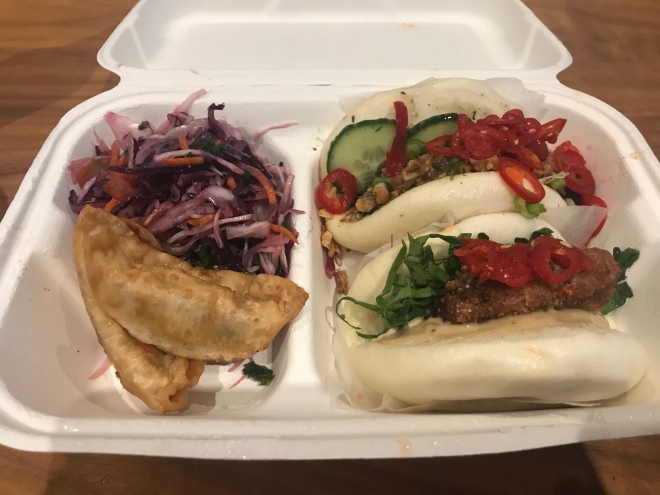 Dumpling Shack: can you ever go past a dumpling place? I know I can’t. I tried walking past but got distracted by someone’s soup dumpling order. Totally worth it, even with a 10 minute wait. 4 soup dumplings came in at £6.50 which is pretty awesome. The casing was a little thick but no real complaint because the pork & leek flavour was great. 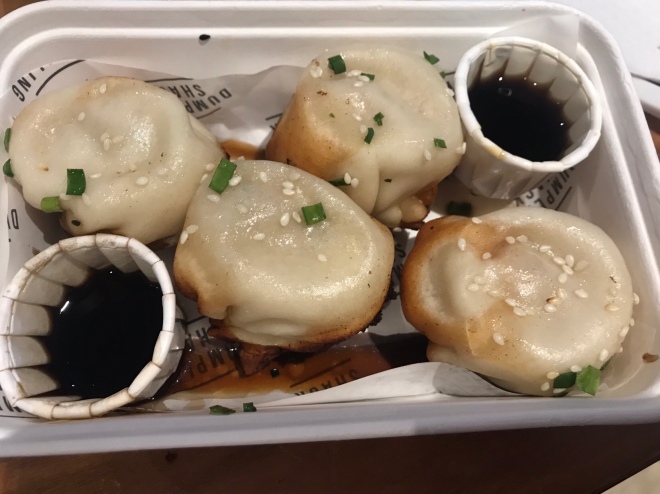 Crosstown Donuts: I mean, these have always been great but they are literally EVERYWHERE in London now! They are decadent but light somehow. So despite the colonization of the city I say, still eat them 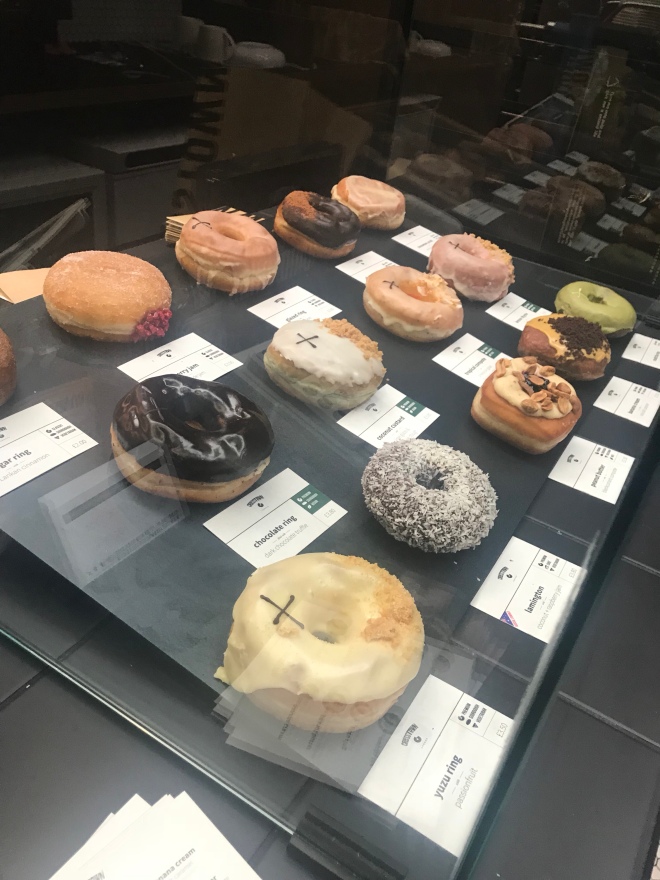 Bedales: ok, ok this wine more than food, I know. But, I did get a cheese plate!! Here’s why I love Bedales: it’s a wine shop that sells wine. Which means there is so much choice and the pricing is really good. 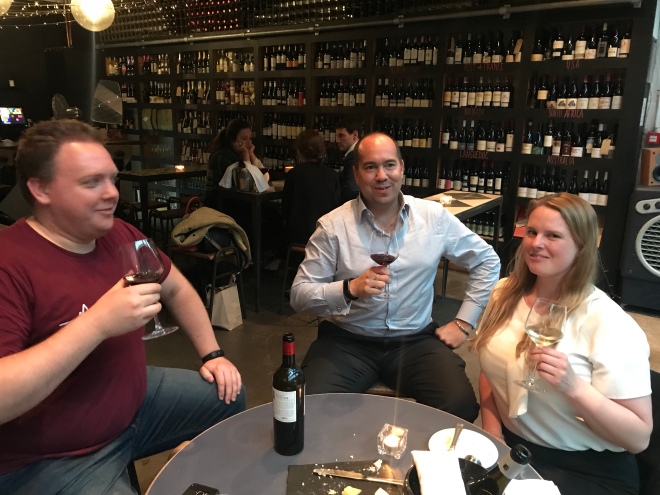 I always think the cheese on cheese plates in LA is small but now I’ve returned to London for a bit, maybe that’s just cheese plate size now? 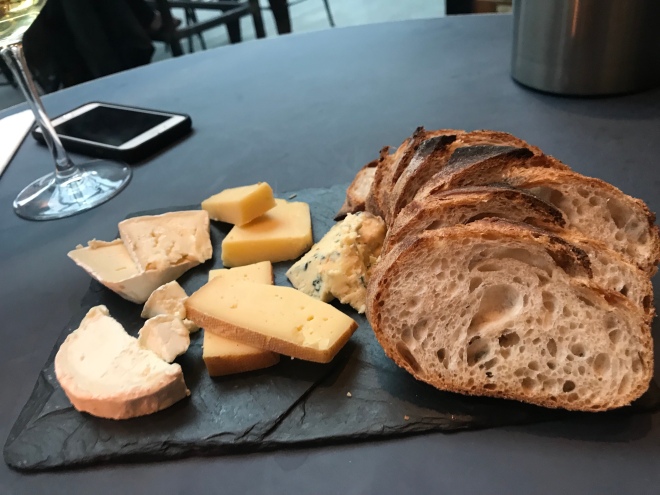 The Dept Coffee & Social Affairs: great coffee and lamingtons!! Can’t go wrong. These and Nude are all over the city now. 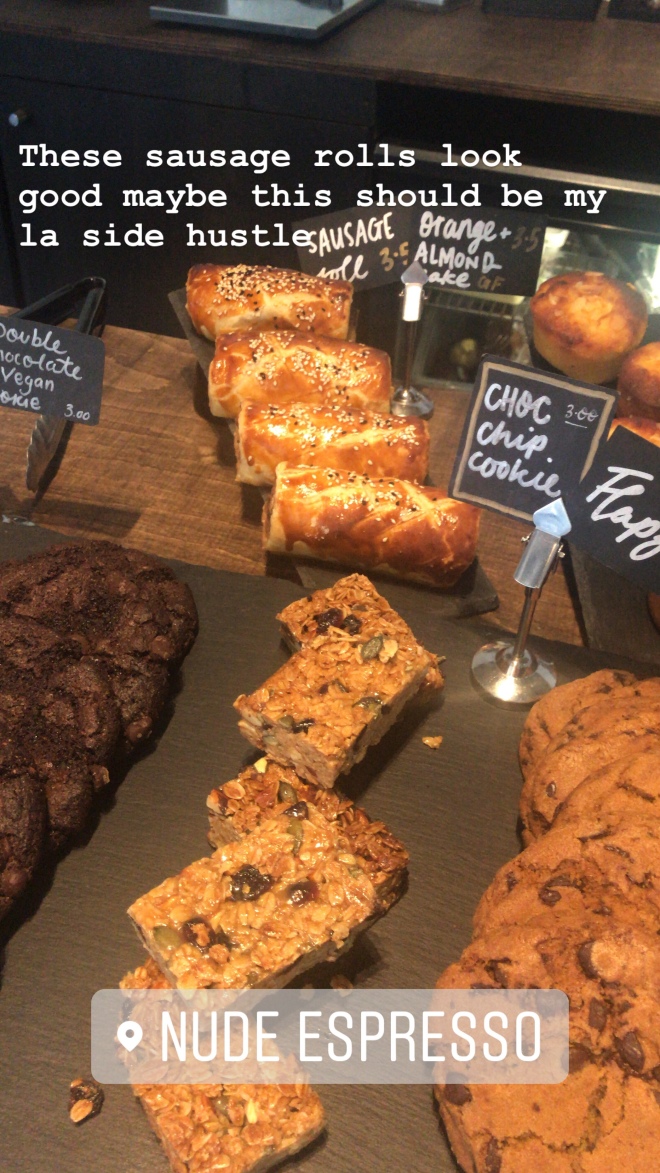 The Diner: the first time we went to one of these we thought it was amazing, it’s still good but I think living in the US means it has lost its shine for me. Service was hella slow too, even for London’s standards. I got the chicken strips which were good and everyone else seemed happy with their burgers and ribs. Mac n chess was pretty average.

Blixen: this place is great! An indoor garden patio makes it the perfect place for breakfast. Last time I was here was one of Jax & my run to brunch moments, but this time it was just a final London pig out before heading back to LA. So in the spirit of pigging out Al & I shared: 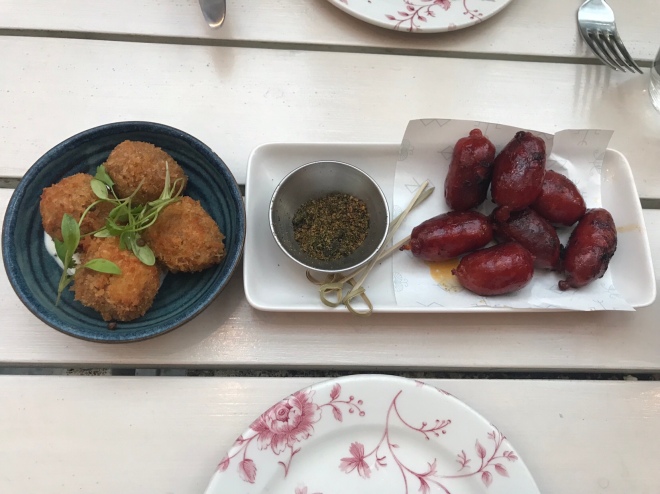 Chorizo bites- these were really good. The onion & herb powder dip was pretty much pointless but the chorizo itself was delicious.

Potato Rosti with salt beef– winner! Poached egg, gorgeous salt beef with a mustard hollandaise with a super crispy rosti. I’m not a mega hollandaise person but they didn’t drown it in sauce which was great. Salt beef is amazing, and it went beautifully with the rosti. 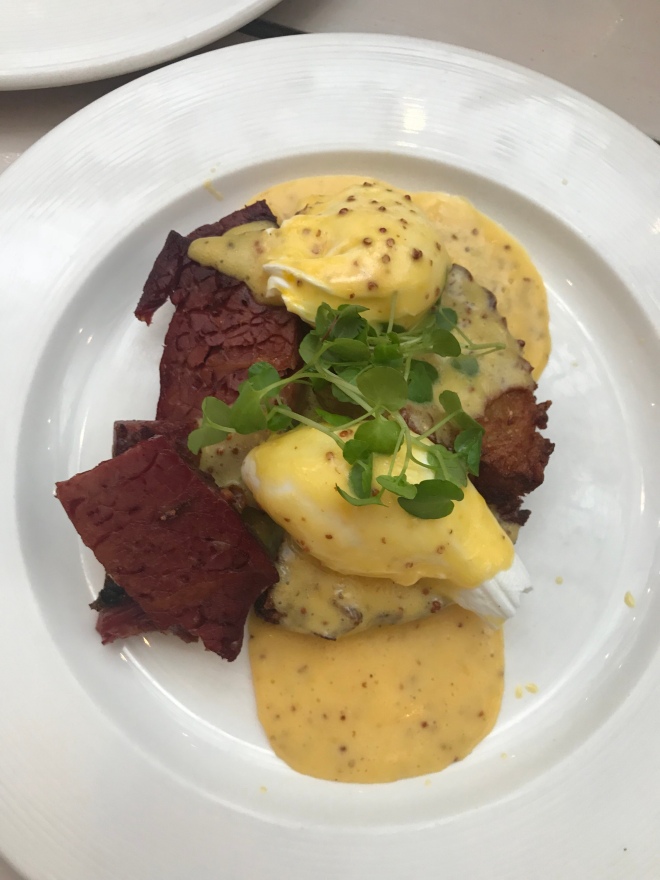 Pulled pork crumpet– it’s no secret I am a huge crumpet fan. Pile them high with pulled pork and you have a winner. The pork sauce was a little too sweet for my taste and the apple yogurt too plentiful but the concept was great. 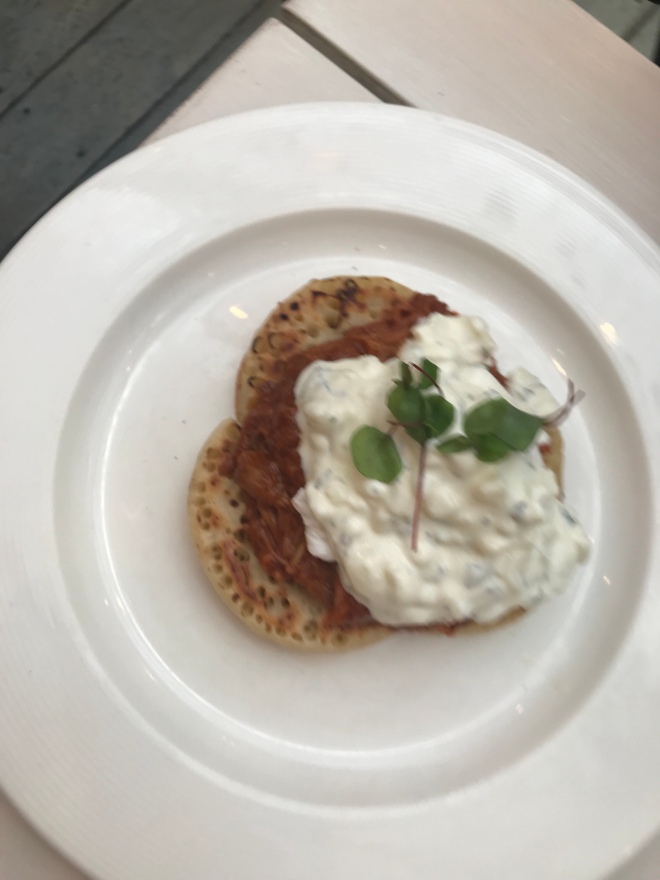 On the weekend there’s also lots of little stalls that sell a range of food. The market itself has become way too gentrified but still provides some yum eats. Plus it’s a great location.