So this was maybe not my best example of organization. I booked an over night in Ojai about a month ago, kind of forgetting it was devastated in the fires at the end of last year. Add to that, California is having their version of the blizzards the rest of the world are having: rain!

I dragged an exceptionally hungover Al out of bed early on a Saturday morning, fed him eggs & bacon and rolled him into the car. We took the coast road up to Ojai, basically because I don’t see any other option when you can drive along the beach. As per usual it was gorgeous, but totally different to how I’ve seen it before: grey, rain & flat water. Sadly, no pics because hungover Al didn’t have that function in him.

We made it up to Ojai about lunch time, pretty much perfect. You could definitely see the devastation from the fire, but in good news there is some green coming in again. 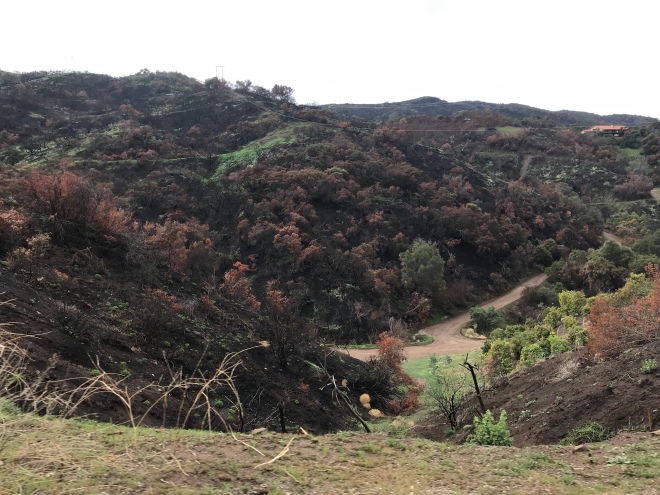 For lunch we went out to Deer Lodge. It’s what I would call on the outskirts of town and totally worth heading over to. It used to be an old gas station and now is a quirky bar selling good food and playing live music in the evening. They have their bbq set up outside producing piles of heaven, you don’t want to miss it. 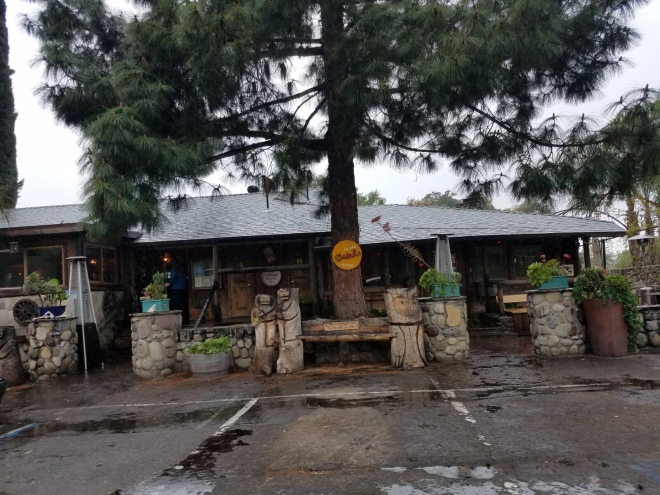 Al opted for the bbq plate with ribs & brisket so I could have some brisket. It was so damn delicious. Beautifully soft and their bbq sauce was great, something I don’t say often.

I opted for a healthy choice and had the fall panzanella salad. It’s all local produce so it felt like the right choice. And it was. It’s a beautiful salad and having it with the brisket and stolen fries was pretty much perfect. 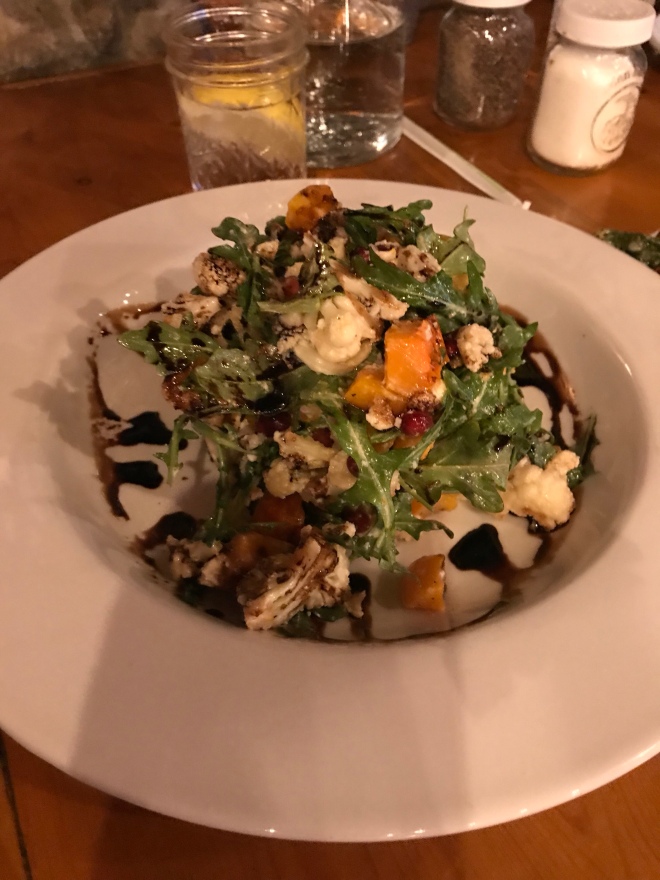 Oh, I forgot we got the Padron peppers too. They were a let down, over cooked and missing nice salt chunks

With the rain continuing there was really only 1 thing to do: head to the Ojai Beverage Company. This place is great! It’s a liquor store with a bar that serves food. You can buy a bottle in the store and drink it at the bar or just order from there. We started off with the wine flight, well, because it was free with our hotel. It’s basically a stack of house wines, if you’re paying don’t bother with it. Just pick some good wine.

I ended up settling on a rose called Jill, I mean, it was essentially made for me. 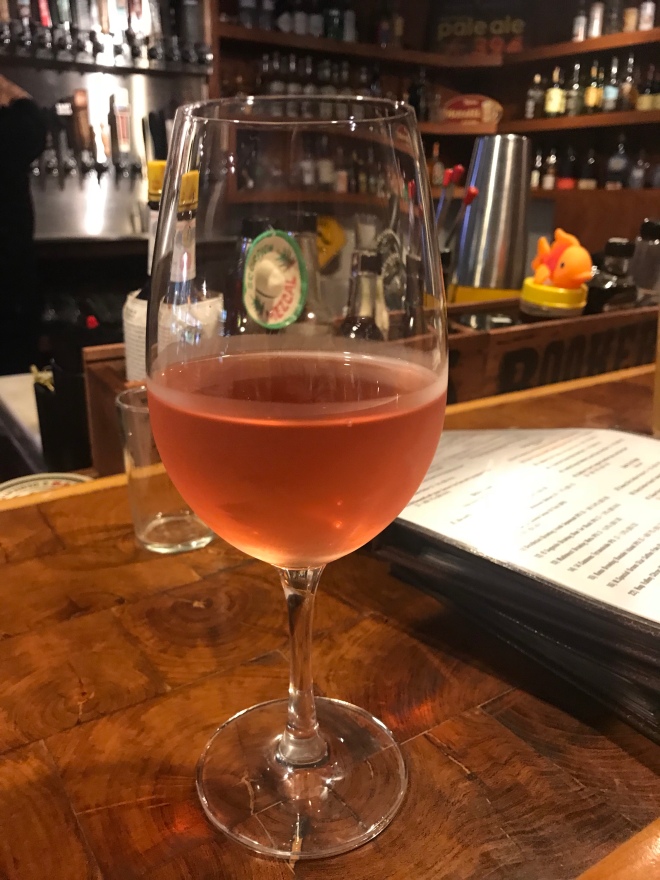 This should come as no surprise: we ended up giving up on our dinner plans and eating at the bar. The food coming out looked good and quite frankly, we were having too much fun. Al of course went for an obnoxiously large burger – and he couldn’t finish it!! I’ve never seen this happen before. He did say it was super tasty though. 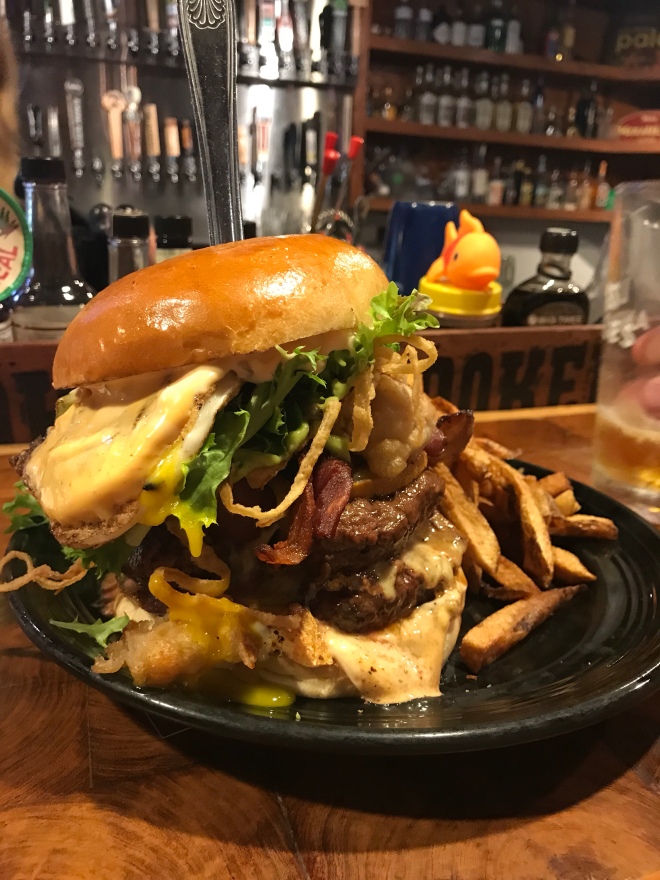 I opted for a pulled pork Mac n cheese toasty. It was tasty but no Grill My Cheese Baby Got Mac.

The next day the rain eased off but it was still grey and the hiking trails were all closed from the fire & rain combo. So that left us with breakfast & the farmers market to explore.

Breakfast was at Knead Baking Company. A nice über simple menu offering light breakfast so Al, who was still full from the night before, could still get on board. We split the egg & bacon roll & quiche and both were good. The bread was delicious with a crispy chewy crust that worked.

After that we wandered around explored the farmers market, found the outdoor bookstore and looked in a few shops. And that was it! 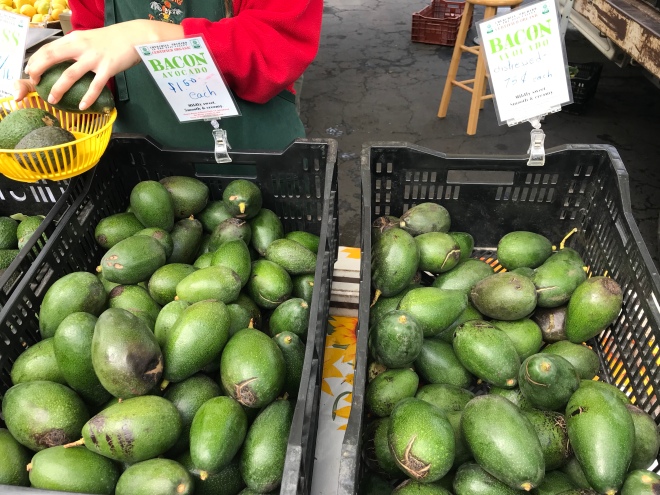 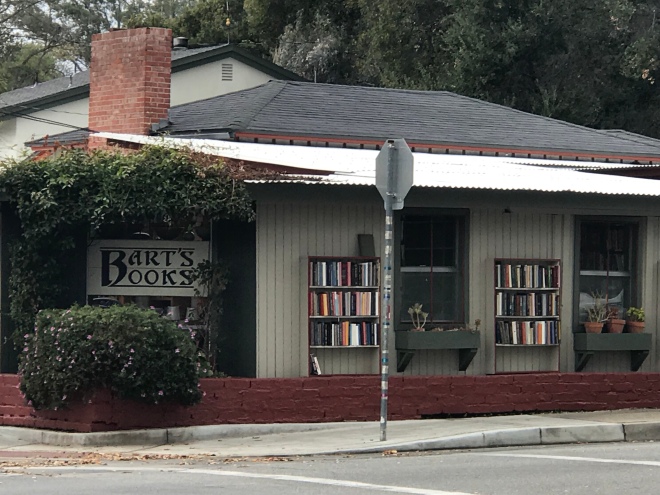 I’m definitely sad we didn’t get to do all the things we intended to do out there, but it’s ok. It’s only 1,5 hrs away, it’s not like I won’t get the chance to go again.

The weird thing about the rain- it must have stirred up some of the soot from the fires. When we were looking over the town you could smell the smell of fire.

So if you’re in Ojai and it happens to be raining all the time this is your answer to the what do you do question: eat good food & drink good wine.