Winter in LA- a perfect time for Malibu

Oh LA, even in winter you offer up beautiful days for outdoor adventure. A little different to the snow day my London friends were experiencing 😁 Being a perfect LA winter day, it was the perfect day for a Malibu trip. I love driving down the PCH along the water, and it’s way less stop/start-y in winter than with the busy-ness of summer (which makes sense).

I was determined to take better advantage of the #dinela season this year and made Duke’s in Malibu one of my bookings. Because it’s a bit of a mish heading out there, we decided it was worth tacking a hike on to our day. Besides, a hike first makes for good guilt free eating 😁.

I’ve recently been introduced to the All Trails app (free to download) which I think is awesome. You can search heaps of trails and it gives you a map, some written directions, tips on parking and reviews by people. This is how I found the Mishe Mokwa Trail to Sandstone Peak. 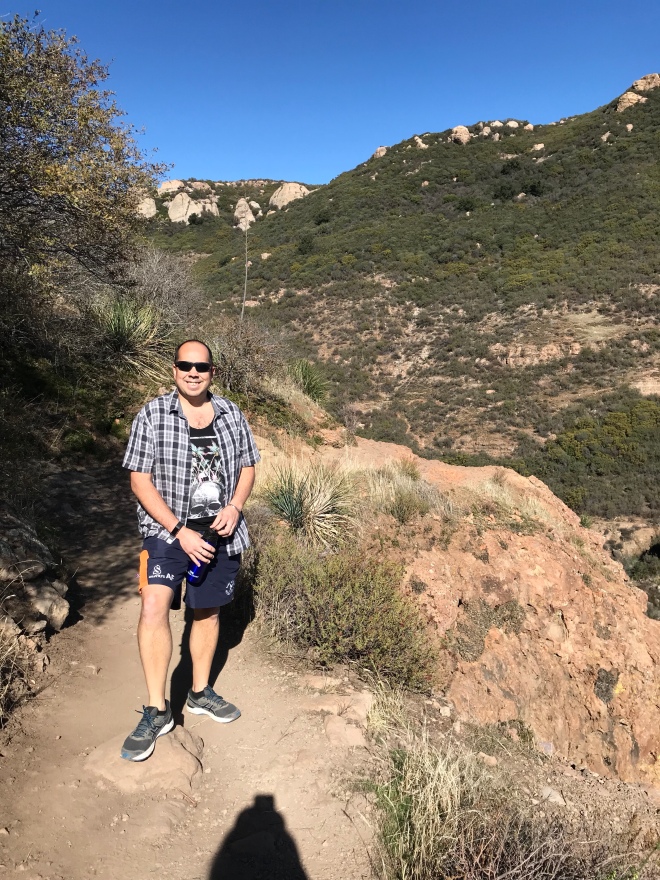 It’s close to a 6 mile loop with some great views, and one that definitely feels like you are hiking rather than just walking – by that I mean there’s rocks for me to have concentrate on (I have terrible balance).

You can go up to the peak which is the highest in the Santa Monica range, but we didn’t. It was crowded and steep …. and we were hungry and running late for our reservation. Instead, here’s Al on some non-crowded spots looking like the king of the world. 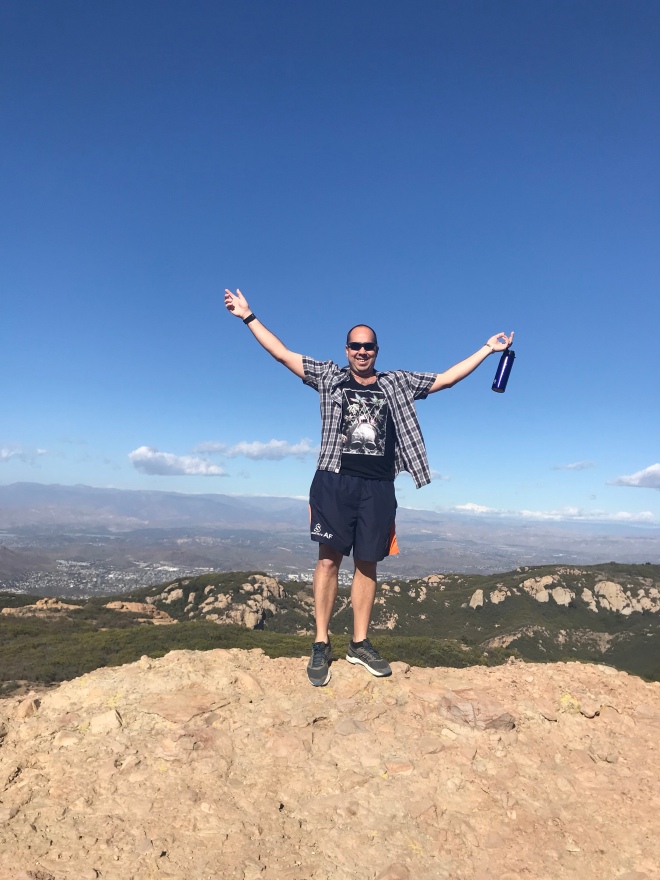 I think it’s fair to say this Trail is not technically in Malibu, especially as we crossed over the Ventura County line. But, it’s still the Santa Monica mountains and it came up when I searched Malibu, so I’m counting it 😁

The hike took us about 3 hours. The one think All Trails doesn’t do is give you time estimates. I would say it can easily be done quicker but 1. I wheeze like I’m dying in the Mountains and 2. I’m super cautious on lose rocks (2 badly sprained & fractured ankles done during ‘safe’ city walking will do that to you).

It turns out I make a lot of sound effects when filming that I didn’t realize were out loud So starving and late we headed to Dukes’s. It’s right on the water front so ask if you can have a window seat. I did not know to do this and our waiter could not work out how to help with this so I ate my meal staring longingly at the water from “afar” – 1 table away.

The #dinela lunch menu was good. $20 for 2 courses. We opted for the calamari and the crab wontons. 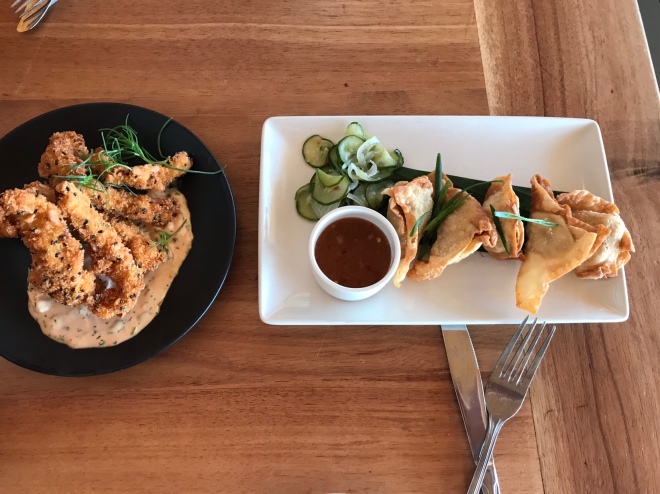 The calamari was chunky without an ounce of chewiness or rubbery-ness to it. The sauce it came with was good but I liked the wonton ginger sauce more. It went really well with the crumbs, which were crisp and not greasy (phew).

The wontons were good. Crab meat and potato I think. The calamari definitely won this round though.

Next up was the fish tacos and the crab & shrimp salad (which was ordered by Al, who it seems, likes to completely throw me occasionally with his ordering).

Now the tacos weren’t necessarily the smartest get-the-most-bang-for-your-buck choice when they are $14 compared to the other choices at $18, but I didn’t think of that at the time. Besides, they were really good;nice chunk of fish and the slaw was amazing!

Then the salad topped it all off nicely. A lot of crab meat throughout, and probably about 8-10 prawns. Not giant prawns but decent size. Like most salads, I found the dressing a bit much quantity wise, but it was nice.

Duke’s has a few locations across California & Hawaii but not in a way that puts me off. It’s nice food, in a casual environment with great views. They have a bar as well which would be awesome for sunset drinks (driver or Uber required).

Finally, a little tip about the Malibu site: have money for the valet. They have normal car park but it fills up quick and it’s pretty impossible to park on the street here. It’s $6, and we think they might have taken card but you need tip money too.