We all know what January means; a world-wide health-wise trance like state for us all. Don’t panic, I too am one of those people who likes to start the year off “how I plan for it to be: healthy, focused and strong”. Not like I finish it – so stuffed full of food & booze I could barely drag myself off the couch.

So after a week- 4 days- of excersize and smart choices I thought I would get a nice lunch between Volunteering & yoga. You know, because I’d ‘earnt’ it 😜 I headed over to Larchmont so I could cross Mr Holmes Bakehouse off my list. I thought I’d get a lovely sandwich type thing and maybe a piece of cake to take home for later.

Whilst super cute looking, it turns out Mr Holmes Bakehouse is not a sandwich place. It is pretty much all pastries and a teeny bit of cake. But, you know I’d gone all the way there to cross something off my list and my mother always told me to be polite, so I couldn’t walk out without buying anything. I ended up walking out with a lovely box of pastries. FYI: my preference is cake over pastry as a general rule, but sometimes you need to triple check.

About 3 doors down is another bakery! Who does that? But I still had a sandwich need, so in I went. Yup, you guessed it, also not a sandwich place. And I was in the shop, so, that’s how the bakery off happened. I couldn’t leave without buying something. This bakery was more in the cake realm so I felt justified buying another 3 things.

Cruffin: I think this is one of their signature pastries. It’s muffin shaped croissant dough filled with a creamy type custard thing and sprinkled with cinnamon. It’s nice but for my taste I’d spend the calories on 2 pieces of really, really good cake instead (in my head croissant calorie is 2:1 of cake)

Cinnamon crunch cake: a really solid cake, moist and clear cinnamon flavour. I’m pretty sure it wasn’t called cinnamon crunch but that’s what I’m calling it. This was my favourite of everything we tried, probably because it was cake. 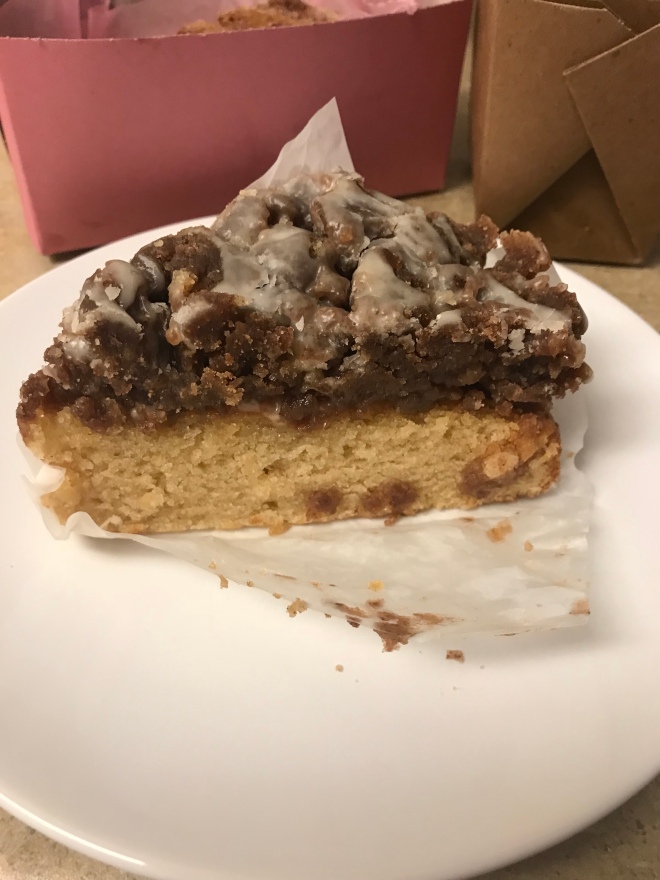 Cranberry & Apple toastie: apparently they call them toasties because they taste like they have been toasted. I didn’t get that. It was nice though. It did however taste like cinnamon mainly, with a little apple. I’d have liked more apple and to have tasted some cranberry. 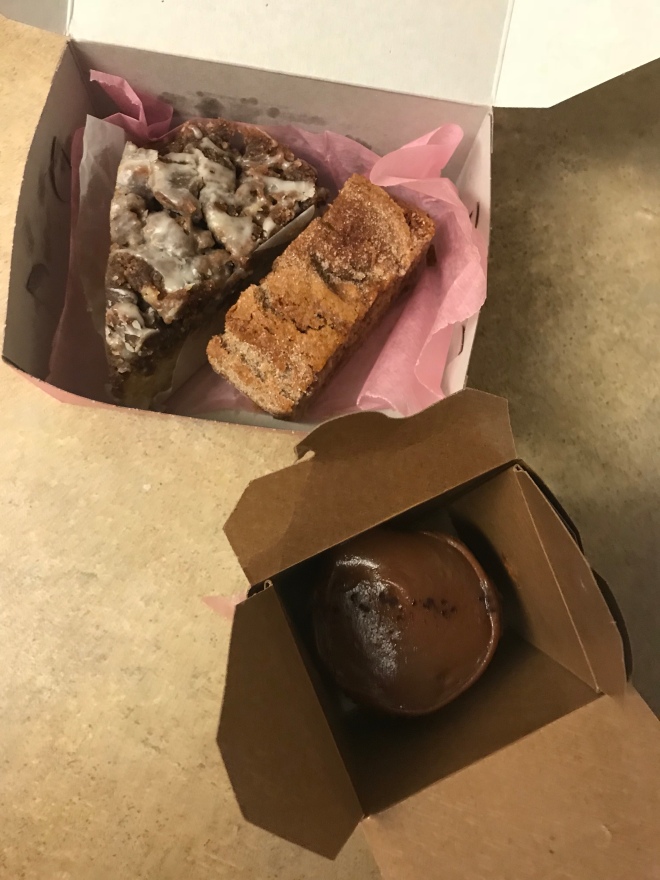 Banana cupcake: this was a bit of a letdown. The icing was terrible and the cupcake was more like a muffin. I have since learnt this place is vegan & gluten free which may have been the reason for this cupcake fail. The heaviness worked in the cinnamon cake but not for a cupcake.

Meanwhile, well done Erin McKenna for tricking me with vegan gluten free stuff without me really knowing. Extra points for you.

You can see from the choices of stuff I had that the 2 bakeries are really different, one is really a patisserie and the other is a vegan bakery.

I can confidently say, I’m still hunting for an awesome cake place in LA. If you’ve got suggestions, let me know. I can’t just travel every few months to satiate cravings.