Beach-side living  is something I could get used to! A couple of friends had recommended that I check out Hermosa and Manhattan beaches as neighborhoods to live it; so with the sun coming through after a few days of grey, it felt like the right time. We’re still using the 10,000 steps in LA book to get us around a neighborhood, that plus a restaurant choice helps you get a decent look.

When it comes to restaurants, I pride myself on being able to sniff out a good one. At the point that I left London, I still had 250 on my list to go to and I had been to a lot, I mean a lot! My LA list is pretty much a week old (plus 20 from a previous trip) and it is already at 132! The choice for Hermosa: The Standing Room

Wow! What a place. I’d heard you could pretty much order anything off the menu and be happy  and after being there, I don’t doubt it. They have a range of Korean influenced American dishes that sounds great, but I only had eyes for a burger (technically my first burger since I got here). There’s some great sounding burgers which makes it hard to choose but I went for the Cash Burger: shishito peppers, bacon cheddar, American cheese, crispy onion strings, Korean aioli & hoisin BBQ. Actual burger is cooked beautifully and the flavored together, heaven.

Add to that perfectly cooked crunchy sweet potato fries (seriously massive portions) and I think I’d put that down to the perfect cheat day.

Then you have Al’s beast, the Napoleon: caramelised onion, bacon, fried egg, smoked Gouda,  American cheese, braised rib, truffle Parmesan fries, Korean aioli and tomato jam. What a beast!! I actually think he nearly dislocated his jaw trying to eat that! He was in burger heaven and when I asked if he’d get it again it was a definite yes but that he’d need to prepare himself for it better next time (time will tell what that means 😜) 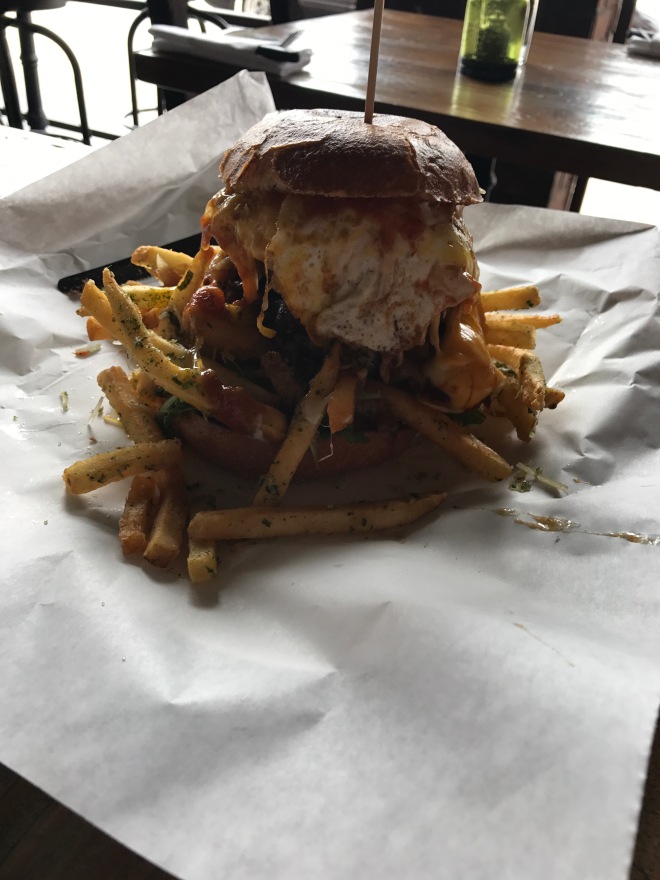 Oh, I forgot to mention, he’d also ordered us shared short rib croquettes as he was worried the meal wasn’t “cheating enough”. They were good but absolutely not needed very crispy outside, very meaty inside.

1. Get into the digesting position and ultimately slide into a food coma

2. Get your butt moving

As we’d ubered out here the only real option was 2. It was time to get out. Luckily it was a short waddle to The Strand to walk along the beach.

It’s a nice easy walk down to Redondo with so many quirky houses to dream over. The eclectic mix of style keeps you chatting the whole way.

For me, Hermosa was nicer than Redondo but Redondo had something big going for it … the Redondo Fun Factory!!! Apparently the biggest arcade on the west side, I was lured in by the giant Pacman & Space Invaders.

So much fun to be had in here! Games are around 50 cents so an easy hour of fun was had.

As you can see, we won pretty big 😂

Then it was a walk back and carrying on down to Manhattan pier. Looks like there some nice places to explore down that way as well but resources our 17,000 step walk that burger was still keeping us full! Next time.