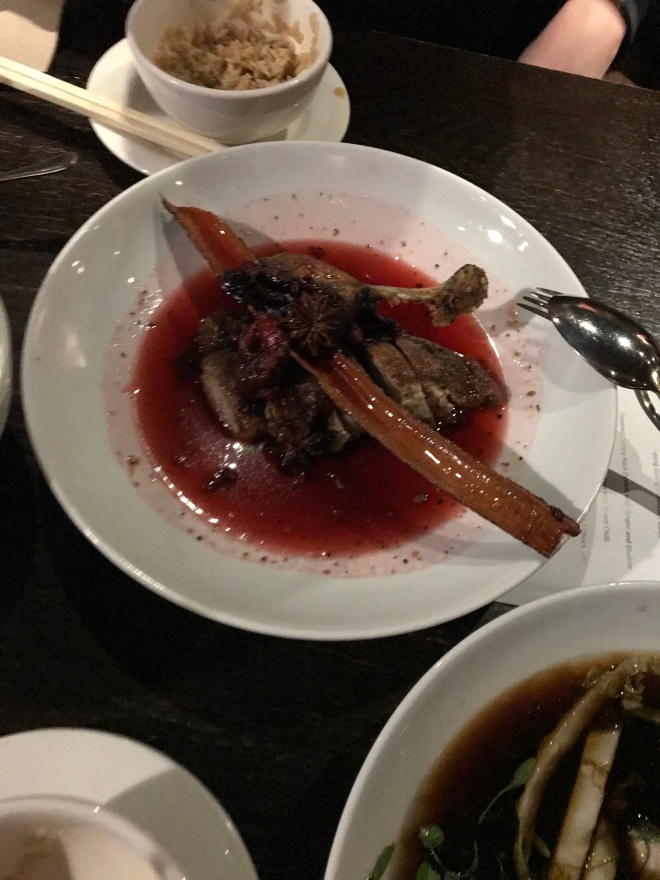 You know those restaurants, that heaps of people have been to, and they always love, but you have never been to? That was Billy Kwong. Now, I am not from Sydney, so I feel excused for not having been, but my friends told me about it while I was in London, and it was definitely somewhere I was supposed to already know about it. Anyway, fast forward about 5 years and we were walking to Apollo for dinner (more on that another day) and as we passed Billy Kwong Jax mentioned that it was closing down. I felt really sad that I was going to miss the opportunity to try it – it was one of those places I thought would always be there. After looking to see if I could sneak in a lunch on my one free Monday this trip (nope), Jax decided to take me there for dinner. Man, am I glad we did.

It feels important to note here that Billy Kwong is closing down because Kylie Kwong (chef, creator, innovator, owner and all-round awesome human) has decided she’d like to do something new and exciting. Not because of any form of failure

Anyway, when you are going in for a first and final meal at a restaurant you know is going to be amazing there is only one thing you can do, order the chef’s tasting menu. At $85 per person, it is an amazing deal. Plus, they are willing to be flexible if you want to do some swaps, talk about great service.

So without further adieu, I give you my favourites from this experience:

I know, I know! I shouldn’t be that excited about a standard (and free) accoutrement that comes with your meal, but these were really good!

So the minute she brought these out and said they were steamed both Jax and I visibly sank. Why do people have to cook oysters when they are so much better raw? I’ll tell you why! Because they did a friggin phenomenal job of it! The oysters themselves were very good, not big, but flavourful and almost a little creamy, but the BROTH! That was where it was at! A simple and light ginger and shallot broth that we could not help drinking some spoonfuls of (like the classy ladies we are). Sadly, we had to use the serving spoon as we didn’t have our own. Totally worth it, I don’t care what you say. I only wish we had kep our broth till the rice arrived so I could have made a rice soup with it (you know, when you pour too much sauce on your rice- something that happened later).

We switched our wontons to steamed rather than fired, which I 100% recommend (unless you are a fry fan, I am a steamed girl). Both these and the steamed scallop and prawn dumplings were divine. Beautifully presented, light noodle and beautiful taste. Dumpling perfection you might say. Have I mentioned that I love dumplings?

This was delicious, but a total mess (of our own making). They offered us to swap from the veggie one to the wallaby which was particularly awesome. Off the chef menu, wallaby was on the specials and I had been keen but decided on the the chef menu instead. Not having eaten wallaby since I was a teenager (and in very different circumstances), I don’t know if the deliciousness I was tasting was particularly wallaby or the amazing flavours they put with it. Any way, nice and totally worth having to go clean up after.

This was the dish that nearly made me say no to the chef’s menu. Not that I am against duck, I like it, and not just in the crispy pancake variety. But because it was fried, and that never seems to go down well for Jax or I. Turns out, this was probably my favourite dish of the night. Ridiculously beautiful plum broth, beautifully presented and a fry on the duck so light you pretty much could not tell it was there. Cooked to perfection. I love it when a dish comes out from nowhere and kicks you in the ass with amazingness. Now I see why our waiter said it was a dish they are famous for.

Our other dishes were also so, so good, but I am trying to narrow down my favourites. The Josh Niland Hapuku fillet was light and perfect, the Australian native greens intriguing, even the fried eggs with xo which was my least favourite dish was tasty as hell.

We had a theory we would box some things, but it just didn’t work out that way. So by the time the dessert came, we were stuffed. Luckily it was 2 scoops of icecream, so I could have taste and be done. The coconut was the best, FYI.

Billy Kwong is set to close any minute now, most likely in the next couple of months before July. If you have the chance, take it in while you can. Then be sure to check out whatever Kylie Kwong’s new offering is. I can’t wait to hear about it. She has already piqued my interest with this amazing meal and her community connection.