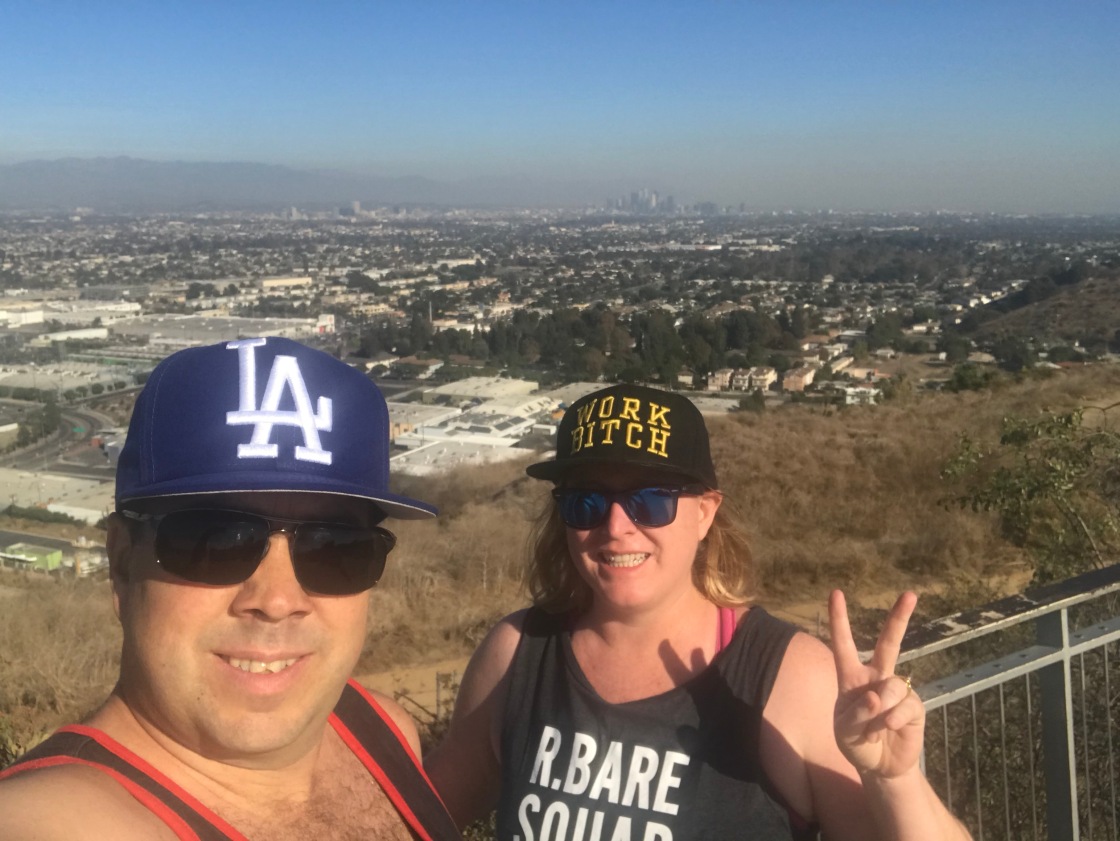 America, California, Excersize, Los Angeles, Things to do by jilltopiaNovember 26, 2017

LA is to hiking like Switzerland is to chocolate. France is to cheese. Germany is to bratwurst. Hmm, I see all my examples are food. Ok,  Australia is to sunshine!  Anyway, my point is, LA is a hiking town. Even when you come as a tourist most people are looking to get a hike in, it’s what you do.

Now that I live here I am getting a chance to explore more of the options and I thought I’d share with you 5 hikes that are:

1.  Easy to do if you’re a normal person ie you can do them in a pair of nikes and while you may feel like you are dying in some points, you won’t need to give up

2. Not overly complicated. By this I mean easy to find and you won’t get lost on the route.

This is probably the 2nd most hiked route in LA. You get to get up close with the sign and come up behind it for a some great pictures. So, one of the things in my criteria was that it was easy, which this one is. But you do need to now which route to take as there are a few options. Plus my friend Martin managed 3 attempts before actually getting behind the sign. So if you can’t be bothered with that, follow these tips.

There is a Hollyridge Trail which is supposed to be a short fairly easy trail but the 2 times I have done this hike over a 3 year period, it has been closed. Which I guess is a good thing as it has forced me to do the slightly more challenging route.

So we have gone the Brush Canyon route both times. You can park in free parking on Canyon drive. It’s a pretty clear trail from here with a  couple of forks in the road, but they are well sign posted.

If you are wanting to get to behind the sign you will need to turn right on the paved road which seems counter-intuitive as the sign points left to the Hollywood sign. If you go  left I believe it i for a good view of the actual sign itself.

As I said, this is a really popular hike so you will see people around all of the time. It’s ok though as everyone keeps a little bit of distance.

Definitely bring some water. This is almost completely in full sun exposure so slip, slop, slap!  You’ll want a hat and sunscreen to keep topping up. With not a lot of shade you are going to feel the heat. So with this in mind, despite having done this, I do not recommend hiking this one on a mega hangover (ok for a little one) as there is a good chance you will in fact vomit!

I think the different websites say this is about a 3 hour round trip hike, it’s about 6 miles. We managed it in less (I think we were closer to 2) which may have contributed to the vomit situation.

I found the Hikespeak website useful for information on this hike

Holy-ja-moly! These stairs are full on! In good news if you a feeling less brave you can take a pathway up, but really this one is all about the stairs.

This hike is a really popular route for excersize enthusiasts. If you are like me, you may feel tempted as you wheeze up the incline to give the people running up a little push but that is definitely a no-o.

The stairs are varied in height and there is no real railing, and it will be busy. There are options part the way up for you to stop to catch your breath and/or switch onto the path so don’t be afraid of giving it a go.

To get to this hike you are going to the Baldwin Hills Overlook. You’ll need to park on  Jefferson Blvd near Hetzler Road. We didn’t have much trouble finding a spot but I can imagine at certain times of day you may have a mini hike to the hike

I’m not going to lie, this one will work your butt and quads. Which is obviously a good thing, but after I had been for a run the day before mine were not too thankful. I am a mega wheezer as well, so I sounded like a pug had swallowed a squeegy toy for the whole way up and a good 5 minutes after. If you ever hear me on this path don’t panic, I’m not actually dying, I just feel like it.
I feel like it’s important to note that we weren’t hung over for this hike 🙂 but had just eaten some mega burgers at Rush Street Tavern so there was a touch and go moment on the last push of the stairs.

The view from the top is great! You can see across the city (fog & smog dependent of course- it is LA). Once you’v taken it all in and stared incredulously at the people who have come up the stairs and are now having a skipping rope session, it’s time to make your way down. For me this is the pathway, there’s no way in hell I’m doing even stairs down a big hill!

The hike is pretty much full sun, so even though it’s a short one it’s still one for a slip slop slap. You could probably get away without water but if like me, the stairs take it out of you, you’ll want a bottle.

This hike is a quick one, I think it took us less than an hour up and down so it is a good one for not taking all day. Though if you are feeling tough, you can do it a few times.

You don’t need a map for this one, it’s really clear so no need for a site. But I have seen there is the parks.ca.gov site.

This one goes in the category of a hike with a bit of a difference. It seems to me that this one is no where near as popular as the others, but I am not really sure why. It’s a little bit further out than some, which may contribute but I like the quietness. It feels a little more like you are an adventurer when you don’t have people all around you.

To access this trail you park by the carousel in Griffith Park. We found it a little hard finding our trail at the start (and spots during) as it is not sign posted like the more popular trails but we made it with a little help from Al & Google.

There’s effectviely a high road and low road once you get going on the trail and after a few jokes about who gets to Scotland before you we opted for the high road in and the low road back. As this is such a quiet trail we found it really peaceful. There was a good amount of shade keeping us out of the hot sun. This was particularly handy as we never seemed to get out before the heat of the day, or without a hangover.

Before you loop back to where you started you’ll find the old zoo. This is definitely worth deviating off the path for. Youll  see the old enclosures, over grown, that you can walk in and out of. It’s creepy. Seriously, there’s a definite weird vibe. Oh, and of course, you will get some cool pictures.

At 3.8 miles this one is supposed to take you about 2 hours. I think we went wrong somewhere though as we didn’t hit that far. On part of the path it takes you up to Bee Rock which we didn’t do, we were happy jut to look up at it. The rock is fenced off now for safety but there are holes in it where people go through. It’s pretty dangerous and neither Jax nor I are known for stability & balance so there was no way we were going out (though I’m guessing Al would have if we got closer, he’s dumb like that).

To end the hike you end up back at the carousel. It’s useful to note if you want a ride on it that it only seems to operate on the weekends.

For this hike, I used the modernhiker website. This site had good descriptions of what you were going to see and help finding the trail.

This is the most LA of all hikes! Easy access off Hollywood Blvd with a few different route options you will find this trail permanently busy with tourists, hikers, runners, dogs and celebs (nope, I’ve never sen any but they all post pics). I think it’s fair to say this is probably one  LA most featured instagram places (along with the actual sign and the pink Paul Smith wall).

We went in via the Vista gate and headed up to the right where you get a quick reward of gorgeous views across the city.  From here you can take the long route round which is 3.3 miles. It gets pretty steep in some spots- I went down on my bum for stability. When I read the websites they say it’s an easy hike, I wouldn’t say it’s hard but there were definitely some spots that challenge you, either that or we ended up on the wrong track (which is highly possible) 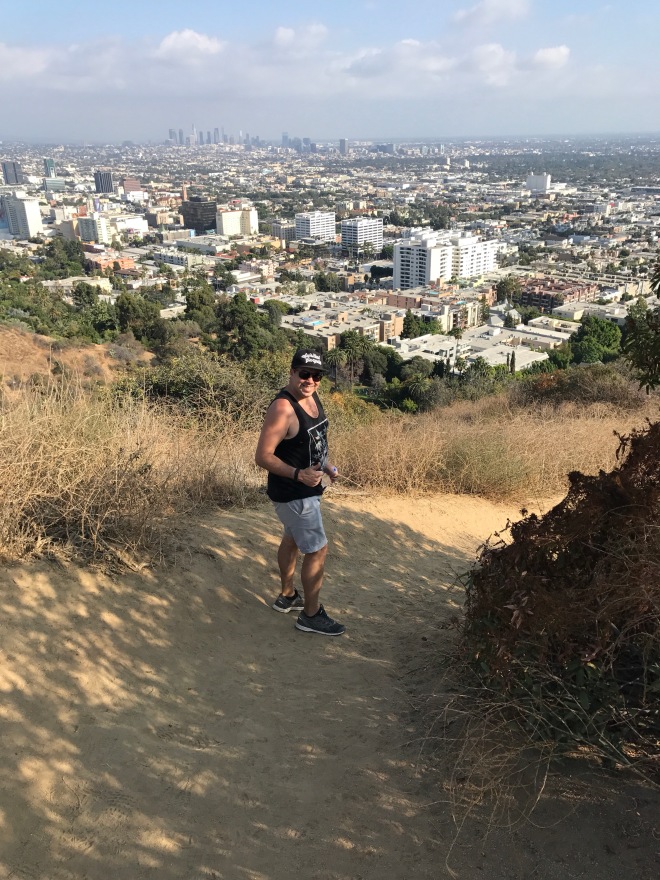 I didn’t use a site for this, which may account for the confusion as to whether or not we were on the right path.

This is a great trail up in Malibu that has actual seasonal differences! I first went up in early May and there were little creaks to cross and the waterfall was not big but had some water- a little like when you go out to Serpentine falls in Perth. But like falls in Perth, when we went again in August, the creeks had dried up and the waterfall did not have a lot of water. And it was a little stinky.

To access the trail you need to park your car and walk up through the residential ‘street’. There is a small parking lot at  but other than that, you’ll be parking on the PCH so be careful.

The trail itself is not as wide as any of the other trails, and is often under the cover of trees, so even when it’s busy you feel like you have it for yourself. Once you get to the falls it widens up and you’ll find the people you knew were there. If it’s not a stinky day, its would be a nice spot for lunch

There’s an option to climb up the falls, but if you’ve read this far down you know I was not going up wtih my balance situation- at least, not until my heath care kicks in.

This isn’t a log hike so you won’t be that sweaty in the end. The first time I did this hike I forgot water which I was worried about, but it turned out fine. At 3.8 miles it’s about 1.5 hours, not a lot of incline which means Malibu Pier Cafe for lunch after 🙂

The Hikespeak site is good for this one.