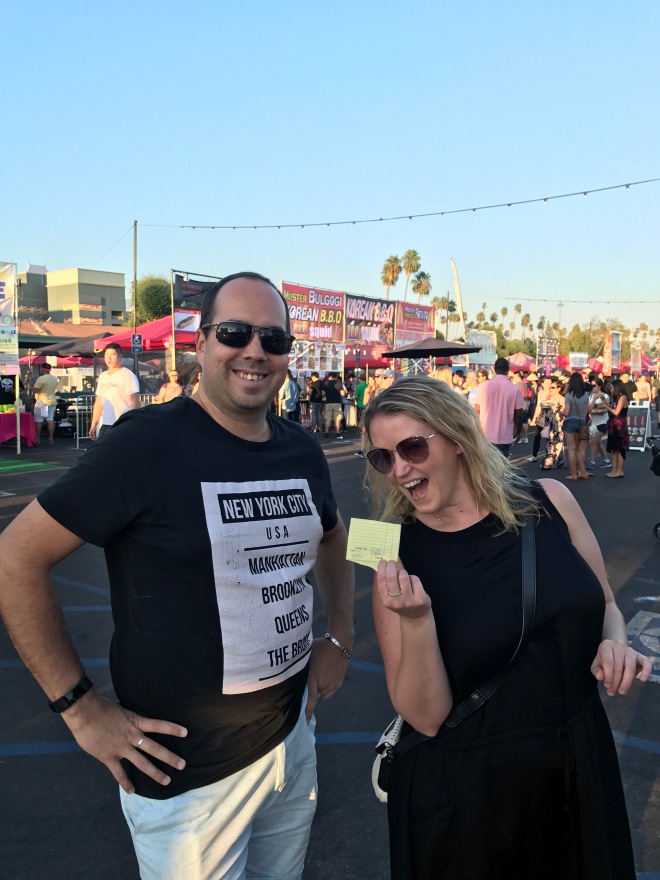 If you are looking for a foodies’ paradise market look no further than 626 Night market! Set out at the Santa Anita race course there’s over 100 different food vendors, you will most definitely want to wear your stretchy pants. At $3 to get in, it is absolutely worth it.

I didn’t think I was going to make it out here until the last one on the Labor Day weekend but everything fell into alignment and we headed out for the Friday night. My best buddy Jax is over visiting for Australia which is awesome anyway, but particularly awesome for testing out a good market. With another person in the mix and splitting things 3 ways there’s more tastings possible.

I’m not going to lie- it’s a little overwhelming with so many choices but we took it section by section and got through it. Little note: you will have to queue but I felt that they were moving through them pretty quickly.

First stop was pretty much the first thing we saw: Rated R Wagyu Ramen Burger. This is not the easiest to eat standing, but my god it is delicious. I love the noodle replacement bun. They shape them and then grill them on the BBQ hot plate for a little crispness. The burger was beautifully cooked and frankly, you are never going to be disappointed by a wagyu party. 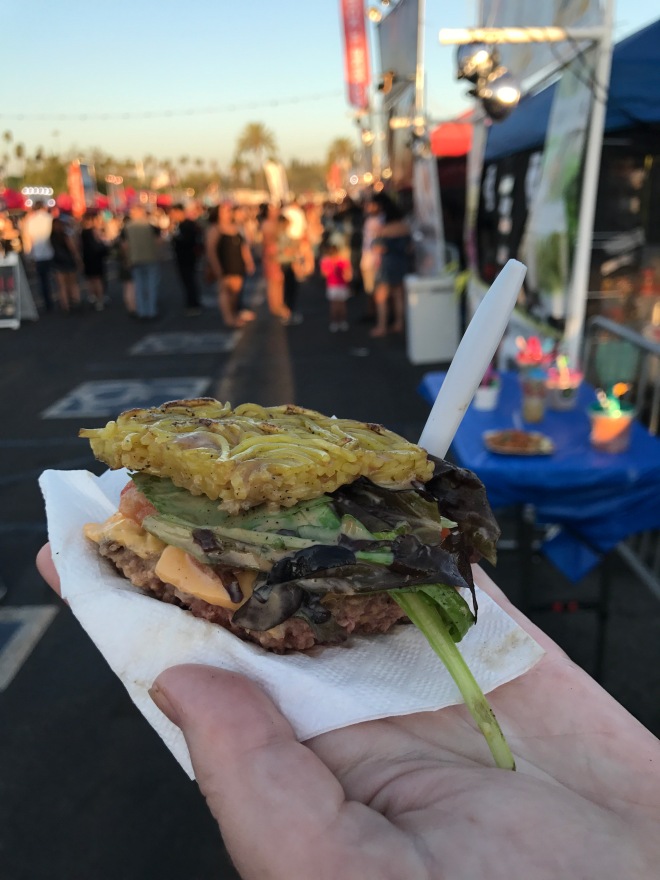 Next up: bulgogi fries from Soul Street. These guys had so many options it was ridiculous. We went with the original which were amazing. The meat had so much flavor. As you can see by the pic, I couldn’t even take a photo before everyone was jumping in. We watched them making some of the other dishes too and they looked great.

There were a few places doing bulgogi fries but I think these are one of the originals- they definitely know what they are doing. 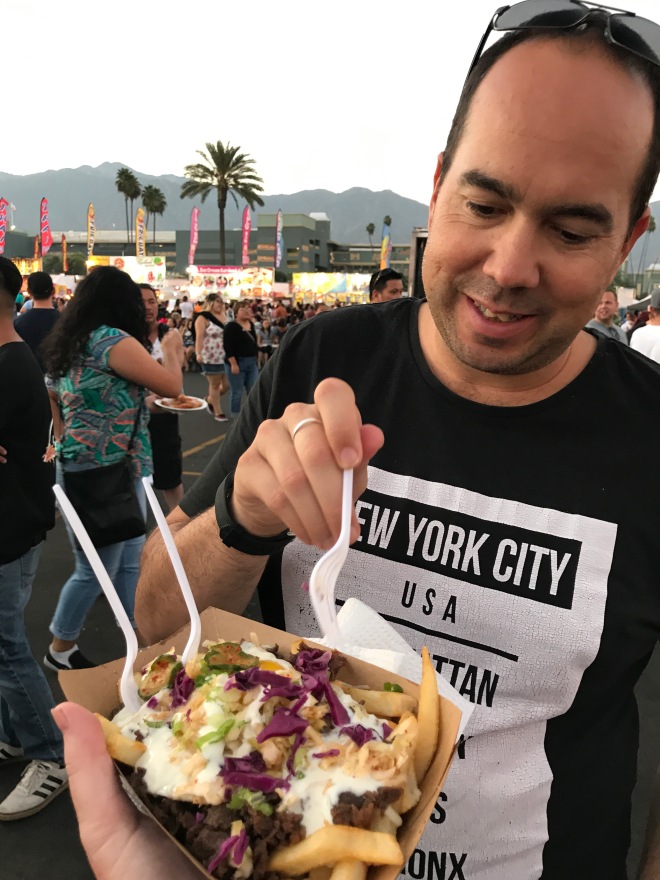 Because none of us can go past a novelty next up was Shrimp Daddy for a garlic shrimp pineapple boat. This was probably the biggest wait of them all, even bypassing the main queue and buying a matcha drink (yuck) so we could sneak our order in early. I love this concept – using a pineapple as my plate- but it’s tough for standing so you’ll need to secure a little space. The prawns were grilled nicely, the garlic rice was great and even the mystery stuff was tasty. No idea on the mystery stuff I’m calling it potato salad with no potato. One of the more expensive dishes of the market it’s a good sharer – you’ll find about 7 big ass prawns in there (yup I can’t help calling them prawns, shrimp sounds wrong and small). Sadly I don’t think either of my pics does this dish justice. I also know you can get this down at Smorgasburg in DTLA so that’s good. 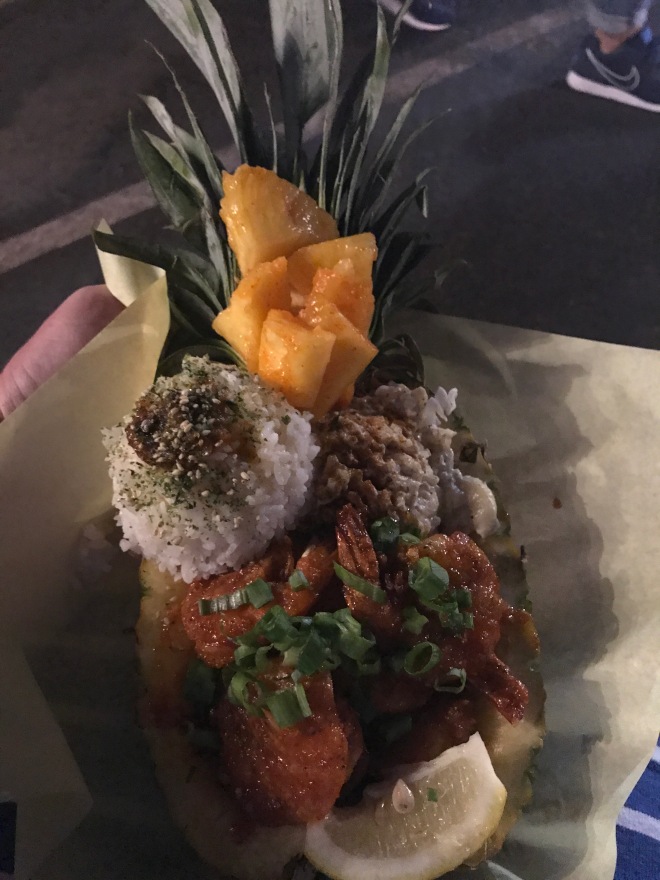 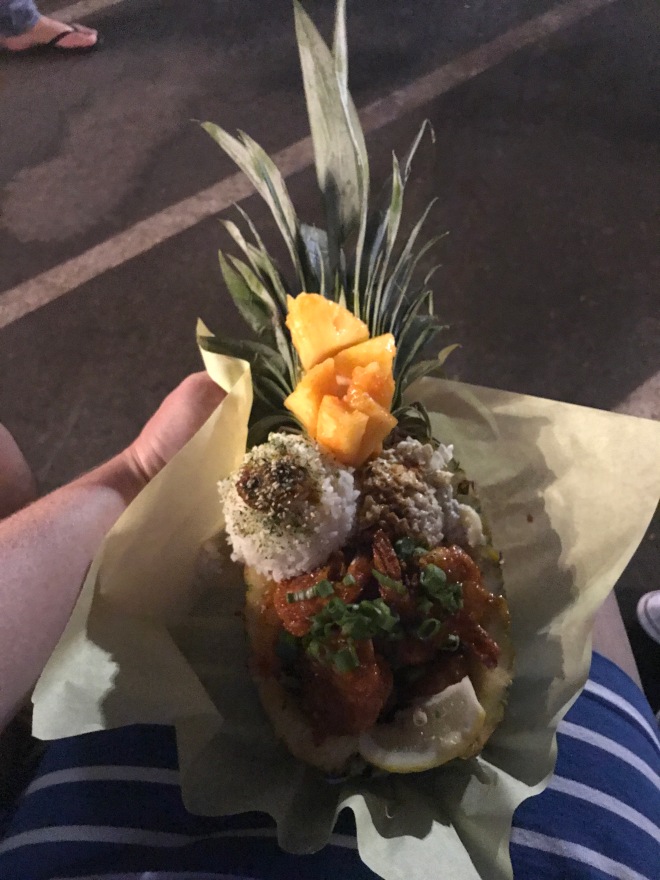 Heading into a slightly full zone we opted for a simple dumpling from Mad Dumplings for our next dish. These were good- cooked the way I like them but we probably could have given them a miss. Everything else we were trying was more novelty and big time flavour so we should have had a separate dumpling day. 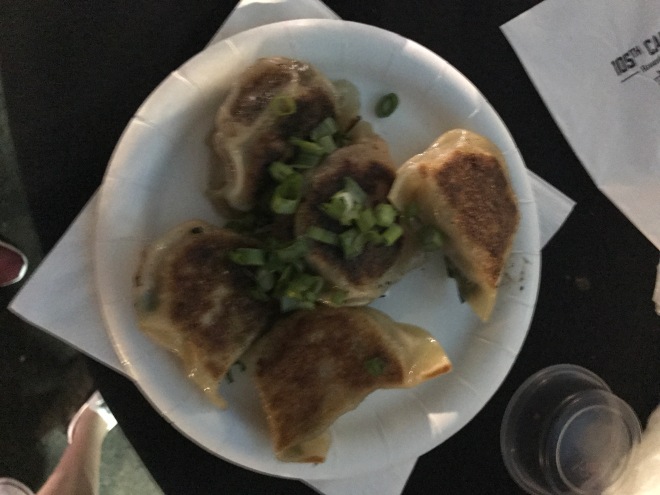 You’ll also find stalls of arts and crafts to wander around as you become slightly overloaded with food. At this point it’s what we had to do, and go over and listen to a little music. I’m not sure if he was mc-ing, karaoking or a mix but it was fun to watch. They had a dj later which people were bouncing around to (they’d clearly not eaten enough as that would have made me vomit).

Final stop: a taco made out of cheese From Taco Yaki. This is pure ridiculous decadence. A shell made out of grilled cheese stuffed with steak and veg. It’s huge. It should be half the size. We ended up throwing half away because it was just too much. While I do not regret it, because how can you not try something like this,  it was way, way too much. And Jax and I both had cheese fueled dreams which I call cheesemares. 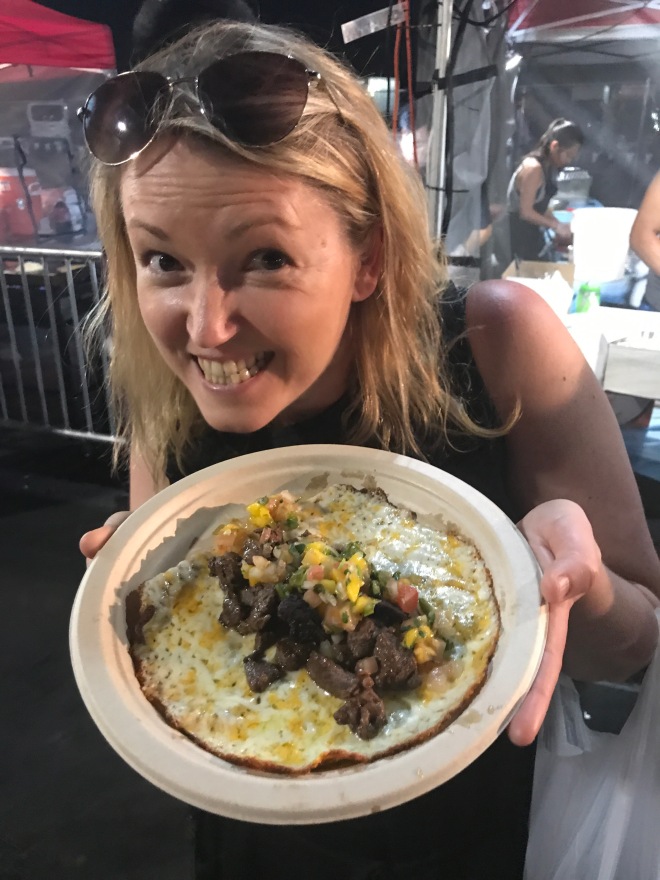 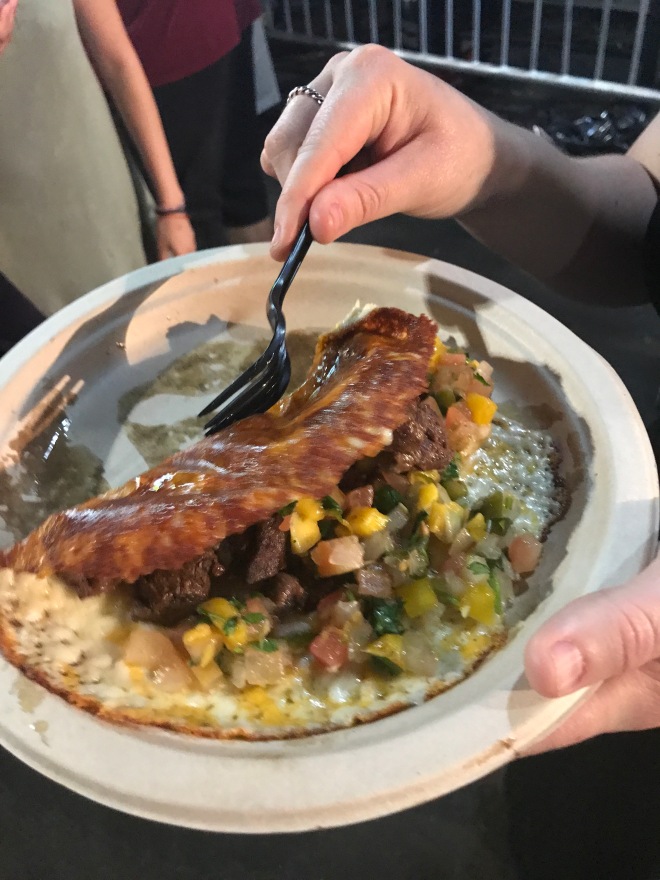 At this point we were all feeling a little sick and needed to roll ourselves home. My regrets: not trying the rainbow grilled cheese and the dick cake, but there was just no room for them.

Luckily there’s 1 more weekend left on Labor Day weekend so I’ll be getting my butt back down there and if you’re in the LA area, you should too.