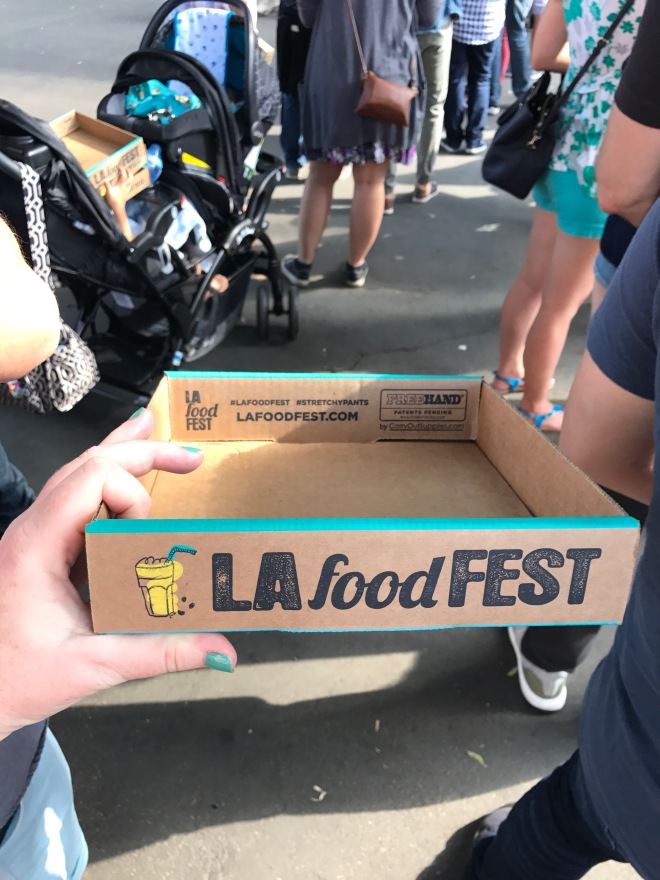 Could you call it the Fyre Festival of food? LAfoodfest

Ok that might be a bit of an exaggeration but it was most definitely a shitstorm.

Since I’ve gotten to LA I have been loving the plethora of food festivals – I have never seen so many in such a short amount of time! What’s not to love? You get to taste heaps of different restaurants & vendors and start planning where to head to for your next meal out (super useful when you are new to a city). When I first got to LA I went to the Taste of the Eastside for my first one and learnt an important lesson: the all inclusive ticket is amazing. They did it so well that I now am using this as a form of filter for deciding which food events I’ll attend (mainly so I don’t bankrupt myself with my own pigginess when I get there). LAfoodfest came with an all included ticket accessing over 100 vendors boasting “stretchy pants required” how good does that sound! Sadly, it was not what was delivered.

Our general entry ticket had entry set at 3.30. It was possible to get VIP tickets giving 2pm access but at the time they didn’t seem necessary, how wrong we were. We arrived at the LA Colossieum about 3.15. We knew we were going to queue but did not expect these sorts of numbers. The queue ran the whole way down the edge of the venue and wrapped around the other side (for perspective the one side includes the science center and the natural history museum)

Al & I had bets on how long it was going to take. I had an optimistic 3:45 confident that they were used to this sort of thing and would process things quickly. Al guessed 4:15.

So, doors were supposed to open at 3.30, by 4pm there was no movement – except with rumors. The strongest rumor was that there had been a fire (which weirdly didn’t seem to scare anyone away). I think doors probably opened about 4.30 and we got into the venue at 4.45. I thought security did a pretty good job getting everyone through as quickly as they did when you consider the length of that queue.

** apparently the issue for getting in was down to a fork lift being in the venue and the fire brigade not letting them open (sounds a little hinky). So VIP were delayed, then they blamed security taking too long to process them through and then they waited for the last VIPs to get a full hour early before they let in general admission **

So we’re in! Happy days! Not really though. Now there were the vendor queues. Bearing in mind the crowd outside and the speed that we got in when it started moving these little vendor queues were sitting at the 20-30 min mark for some of them to get through to the front. Your ticket included booze tastings and of course ID checking was required – there was only 1 point so more queuing. Anyone sensing a theme? This did not bode well for a large number of hangry foodies – I heard the ID check woman saying someone had UberEATS deliver to them while they were waiting to get in.

A quick scout around and I gave up looking for the magical small queue that was going to soothe my roaring stomach and got in for some fried chicken from Gus’ Fried Chicken.  Pretty sure it was a 30 min wait. During this time Al lined up at the beer spot twice – many vendors wouldn’t let you have more than 1 thing so you couldn’t really split up to make it work better for you- and a burger tasting. Finally I got to the front, the next thing is my own fault, on offer was a chicken wing. I hate chicken wings. Luckily Al loves them so he was happy, he reckons the wings were tasty plus I did manage to get him 2, I think it was clear by my face that this was not the time to mess with me. So after over 2  hours of waiting this is what I had to show:

A bite of Al’s burger taster. It was really yummy. Slaters 50/50 in case you were wondering, I’d say worth going to (my grumpiness at the time struggled to acknowledge this)

There was one thing left for me to do: say fuck it! Let’s get drunk. The booze queues were moving well and on my empty stomach proved to be most effective!

I did get 1 decent taster though! Donuts!!! God bless them. Hot Fat Donuts Really good- not too heavy and just what I needed.  I’m guessing by the many questions I got asking where they were  that thet became saviours to many others.

This whole event was a mega let down for me. So much so that it’s taken me a couple of weeks to write this because just thinking about it annoyed me. With the massive waits, inability to really eat anything and vendors selling out quickly it was just a massively over-priced disappointment. I saw on instagram people with boxes full of yummy tasters and it just made me sad- how did they manage it? Is it the well known blogger super power (if it is, I need to work out how to be well known). So this is not one I will be doing again. I think I’m just going to stick to smaller events where I have a better experience.