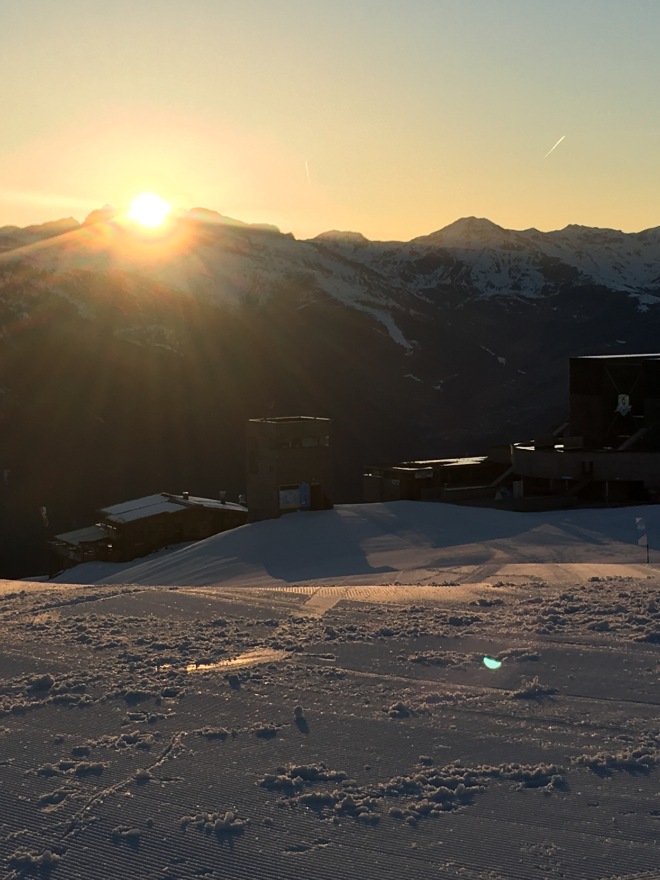 Snowbombing: the food of Mayrhofen, Austria

It has most seriously been a week of meat, potatoes and bread! I would kill for a vegetable right now. The thing is, I’m pretty sure this ends up my own fault so it’s hard to blame anyone else.

I week in Mayrhofen for Snowbombing obviously has a large amount of Hans the Butchers: but there are options as well that are worth exploring.

I’ve put links to the website for those that have it.

Kind of a bar/cafe/burger joint in the Main Street. Pretty much everyone went for burgers except for me. I had an Asian style chicken stir fry salad. It was actually really nice, the chicken had a nice crispy outside and lots of flavour and the salad was full of veges.

Most definitely a bar but they do sell pizzas. Nothing to write home about but hits the spot.

I think I have worked out that Mani is some kind of king pin here. He has s fancy ski wear shop, hotel, ski hire, apartments, restaurant AND an outlet store.

Mani’s serves until late during Snowbombing, midnight, so this is a god send. They have a big enough menu with pizza, pasta, meats etc. First night I went for a goulash and salad. The goulash was not as nice as up at Hans but still tasty.

The second time we got take away pizzas because the 3am pizza place was closed! They are tasty pizzas, lots of garlic. But they cost more than the 3am guy 😝

Off the main strip, near the Ahorn lift this hotel restaurant is a treat. It looks like a lovely wooden chalet inside and has a great Austria menu.

I went for the schnitzel as I was dying to have a good one. It wasn’t too big and they hadn’t bashed the meat so thin that it dries it out. All in all it ticked all my boxes so I was happy.

Others went for the 2 pork dishes in black beer sauce and the oz goulash. All of these were huge.

You will not leave this place hungry and we ended up paying 50 Euro a couple for meal and drinks. Ridiculously cheap! 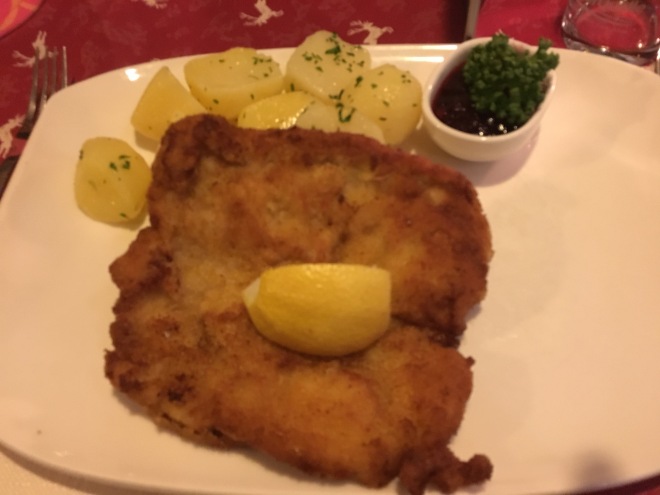 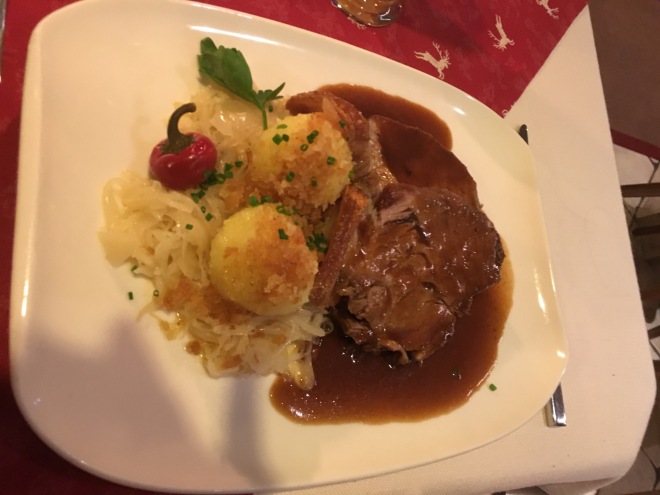 If you’re looking for a good steak/ treat dinner, this is the place for you! It was Al’s birthday and 2 years ago we went here for the Chateaubriand and that’s exactly what he wanted this year 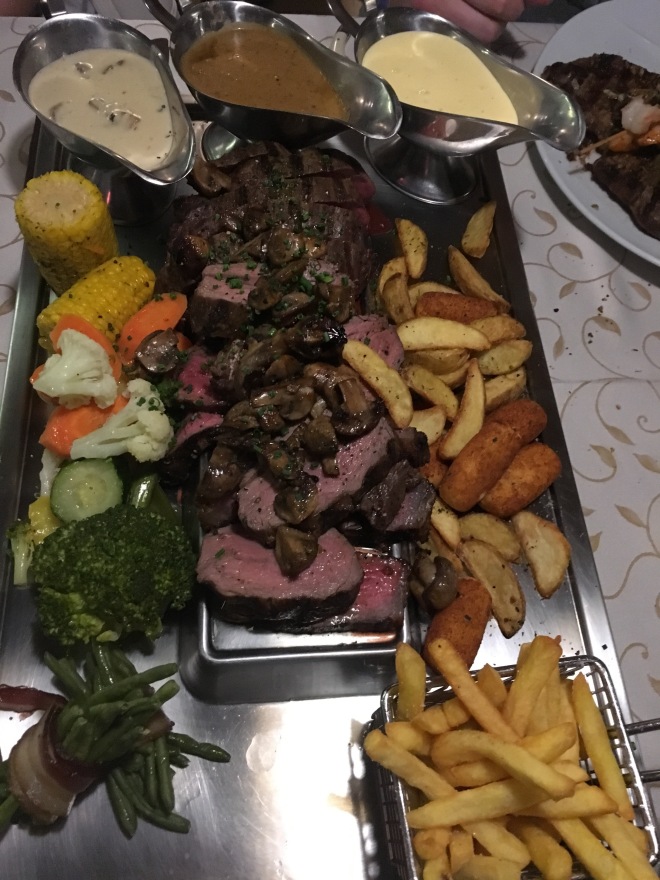 At 68euros for 2 this is good value, and can absolutely feed 3! It’s 2 big fillets, 3 types of potatoes, 3 sauces and a few extra veges. Can you see that stalk of broccoli? That was all me! And those green beans. The sauces are all good and the meat is just beautiful. Normally I like a rare but you have to compromise with one of these bad boys and I didn’t whinge once about it being over cooked.

Our friends also went with steaks. @aussiechessguy did a t-bone with 6 prawns. He didn’t stop talking about those prawns for the rest of the week.  Amanda went for the chilli steak which had chilli flavouring on it and then a fab chilli sauce on the side. I do not expect a chilli sauce with any heat and Europe so this one caught me by surprise! Delicious

Only complaint: you can not successfully go dancing after eating that much. Your body will revolt!

A simple pasta place, nothing special but nothing wrong with it.

We got a table pizza which was the daily special. It had salami and gorgonzola on it which gave it some punch.

The garlic bread was more like a typical looking baguette style one, so garlic. We all tried to pretend we didn’t need it with table pizza but it looked to me like it was inhaled!

For my main I went for a Veg pasta with a garlicky, creamy, tomato sauce. It was nice but way too much. Need to stop eating so much.

I nearly forgot there was dessert as well 😔 in my defence, I only tasted it. Apple strudel: nice apple but pastry needed to be crispier. Chocolate mousse: actually really light, I expected it to be chocolatelier. 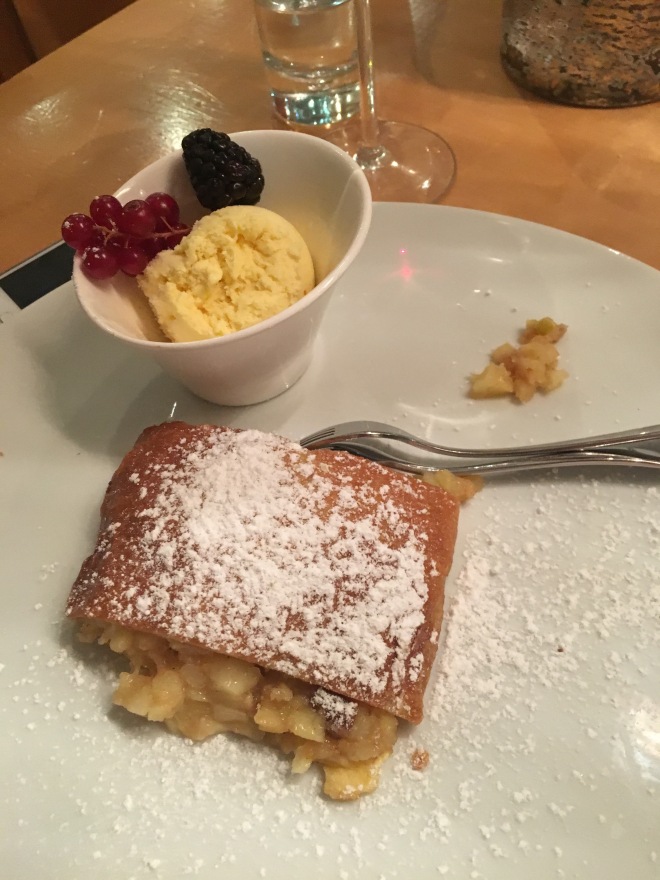 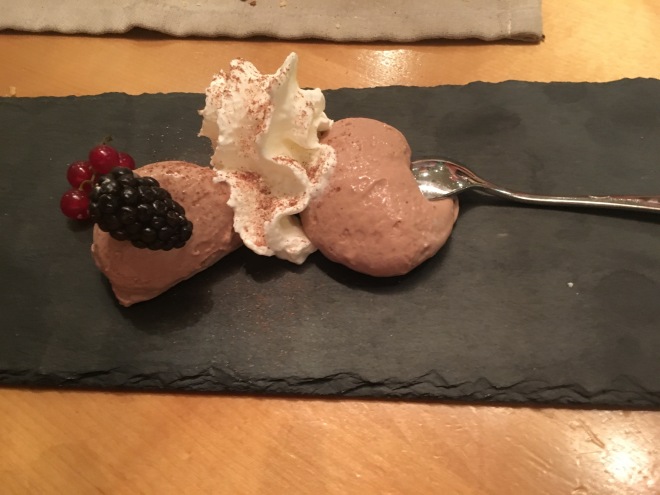 Finally! We tried to go in a few times during the week but they were always fully booked so Sunday lunch it was. This is a great Italian place. Big portions, good food and great plates.

We went for a bruschetta to start which was nice and light, I’d have liked more tomato. 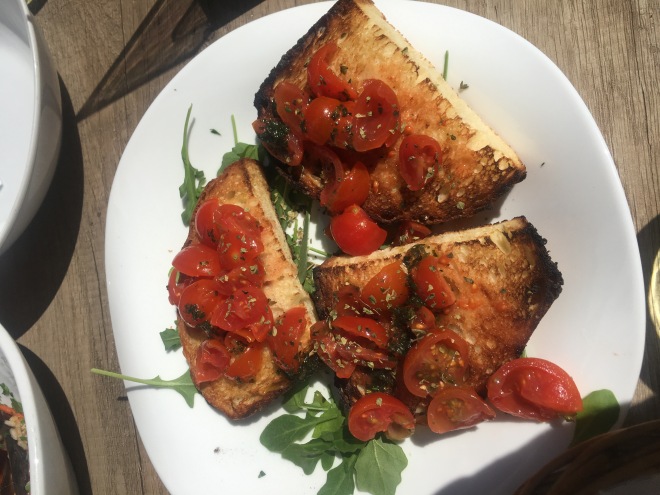 Mains I went for lasagna. I was craving lasagna the other night and the place was sold out so it was a no brainer for me. The portion was the smallest off all the plates but it was good! Nice and sense, beautiful pasta and you can actually taste the meat. 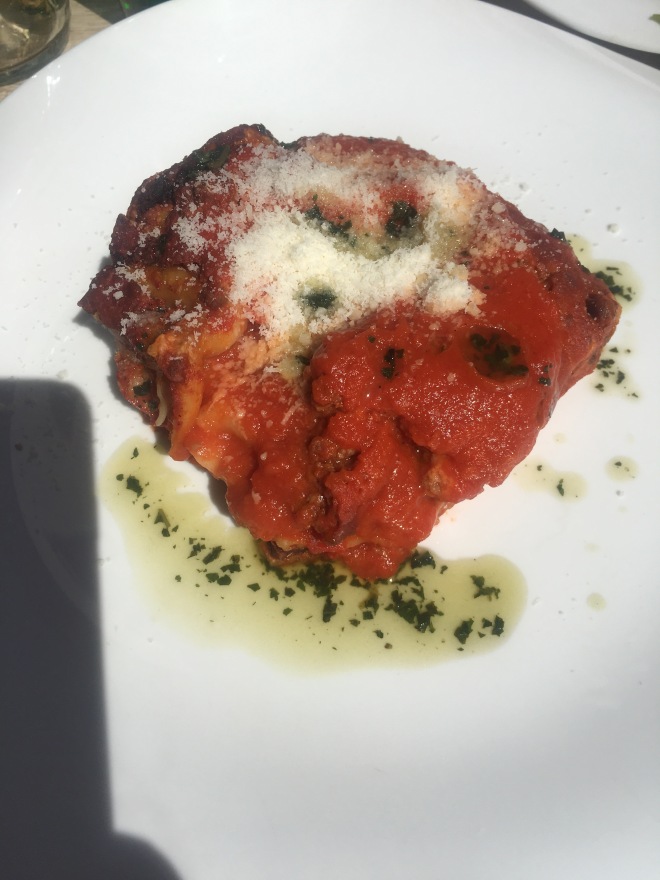 Al went for lamb chops. I didn’t taste them but the potatos were divine- rosemary and garlic and nice and crispy.

I think the stand out dish though was the seafood risotto. Massive! And look at all that seafood. I don’t order seafood if I’m not near the water but I should have made an exception for this one! 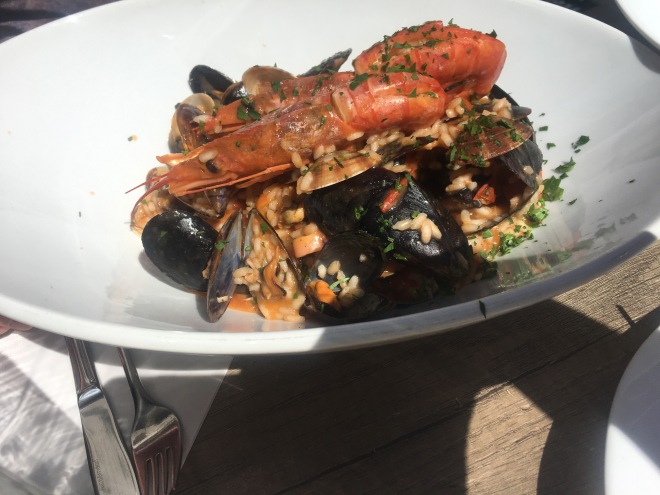 So after a week of over eating I have managed to squeeze myself back into my jeans (with a quick prayer to thank the fashion gods for jeans with stretch in the material). It’s time to stop thid overloading of food now and be good!